Genshin Impact: Bennett’s Story and How He Got His Vision 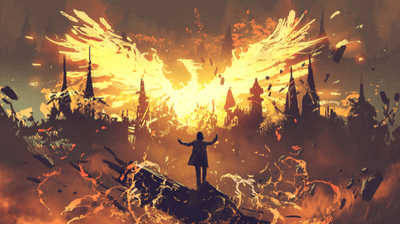 Bennett is a character in Genshin Impact that many players struggle to get. He fits any team and can play almost any role, making him incredibly valuable in any team build. Need a DPS? Slap a Crimson Witch set on and watch him melt everything in his path. Need a healer? Build for HP. Support? Give him a high base attack weapon, and the Noblesse Oblige set to further boost his buffs.

His Elemental Skill, Passion Overload, makes him do a Pyro-infused slash when its activated. You can hold the button for two charges, adding additional slashes per charge. At max charge, he’ll do three slashes, but the third explodes and blasts Bennett into the air in an uninterruptible animation. However, certain talents and constellation upgrades change the behavior of this skill.

Once he has reached level 60 and has ascended, he learns Fearnaught. With this talent, if he’s within the circle of Fantastic Voyage, the max charge of his E skill will not blast him back. Another modification of Passion Overload comes from his fourth Constellation upgrade. With changes the ability so that after performing a Normal Attack and charging it up once (2 slashes), he does another slash. It’s like the two-charge E, without being forced to go flying through the air.

Bennett’s Burst, Fantastic Voyage, is where the magic happens. In addition to an initial blast of damage from activating the ability, he also heals and buffs allies within the circle. Characters within the circle gain an ATK boost based on Bennett’s Base ATK. They also get healed for a value proportional to his HP.

The caveat is characters must stay in the circle for the buffs and healing to work. Before getting his first Constellation upgrade, the ATK boost won’t kick in until the character has greater than 70% of their HP. That is the limit of Bennet’s healing capability. He won’t heal characters to full health, barring exceptional circumstances. He also won’t heal inactive party members, unlike Barbara’s Elemental Burst.

Aside from these useful supportive abilities, Bennett is also a great Pyro elemental status applicator. According to the game’s Elemental Gauge theory, he can apply two units of Pyro instead of Diluc’s one. It’s best seen when he uses his E skill as he can set grass on fire at once while Diluc must do two slashes to do so.

All this means is that his Pyro status lasts longer and can be good for two reactions before needing a re-application. All these characteristics make him a versatile character that can fit into virtually any role.  It depends entirely on how you want to use him. As a DPS, the Crimson Witch set with Crit main or sub-stats and a Pyro DMG Bonus on the goblet is best. Along with that, he’ll also need a good sword with an ATK or Crit sub-stat. Prototype Rancour or Aquila Favonia with Physical DMG Boosts can also be good if using his auto-attacks.

If used as a Support, a 4-set Noblesse Oblige set is best. Maiden’s Beloved can be used as a substitute, though Noblesse has better utility overall. Build up his HP and use a Healing Bonus helm if you want. A high Base ATK sword is still recommended for the buff, although with an Energy Recharge sub-stat instead. That means either the Festering Desire or Skyward Sword is best. Since the buff is based on Base ATK (his ATK stat + the weapon’s Base ATK), any further increase in his ATK doesn’t influence the buff at all.

Bennett’s Story and His Bad Luck

Bennett is a ward of the Adventurer’s Guild.  He was found as a baby after a terrible ordeal. After going through all the trouble of finding baby Bennett and no other treasure, they still considered everything worth it. The baby was taken care of by several childless and single (mostly male) adventurers in the Adventurer’s Guild. They were the ones to name him Bennett, and in turn, Bennett calls all of them ‘Dad.’

Growing up in such an environment, it’s not hard to understand why he became an adventurer himself. However, it seemed that he was abandoned by the world, being famous for his bad luck. Things just went wrong around him: sudden thunderstorms, empty treasure chests, or getting trapped in domains, calamities just followed him wherever he went.

This unfortunate trait of his means that he lives an unusually solitary life. Adventurers are usually in teams of three to four. Both for mutual support and safety. However, Bennett’s Adventure “Team” is just him. Everybody else refuses to work with him because of his bad luck. Fittingly, Katheryne took pity on the boy.

Outside of adventuring, Bennett spends most of his time taking care of his aging dads. Whether it’s locating lost dentures or taking care of their general needs, if he can bring luck to others, he doesn’t mind having almost none of his own.

Throughout his life and misfortune, he has gotten used to pain, adapted to it as you would to an intense smell over time. That’s why he engages in all sorts of risky maneuvers, though it does have a sense of self-destruction to it. Still, it’s impressive to witness his tenacity and perseverance.

Even though he’s alone, Bennett is glad he hasn’t roped any other people into sharing his bad luck. He still goes on adventures by himself, even if he usually ends up in the care of Barbara at the church. Although alone, he carries the good wishes of everyone in all the adhesive bandages he gets. It could be from the deaconess, a random traveler he meets on the road or even his dads. He never feels lonely when he thinks about all the people who care for him.

How Bennett Got His Vision?

Since he was brought up by adventurers, his passion for it burns with unquenchable intensity. Neither rain, shine, nor whatever bad luck he encounters deters him. Thus, it was inevitable that he would end up on a truly perilous adventure at some point.

Bleeding from multiple wounds, with no chance to ask for help, Bennett still persevered towards his goal. There was no way he would turn back. He was certain there was treasure waiting for him at the end. In the end, he found nothing.

He took it in stride and just considered it part of being an adventurer. However, after some an exertion, body couldn’t sustain itself any longer and he fell unconscious. He didn’t fear death, because it was well-known in Mondstadt that Barbatos brings all weary adventurer souls to rest eventually.

Bennett woke up the next day, his wounds cauterized and a pulsing red jewel in hand. It glowed in sync with his heartbeat, a tempo that matches his passion. From then on, he continued his adventuring with the same unstoppable fervor from before he acquired his Vision.

It was his passion that allowed him to acquire a Pyro Vision rather than any other element. It’s the common thread that ties Pyro users together. Diluc included, though it isn’t too evident in his demeanor and general grumpiness – he has a burning passion to protect Mondstadt, even if it’s buried deep.

That’s all we have on Bennett, the jack-of-all-trades. He’ll be a valuable addition to your adventuring party if you let him (and hope that his bad luck doesn’t rub off on you). Make sure you build him properly for the role you need, and he’s sure to earn a spot in your party.

Bennett may be unlucky, but the Traveler is lucky to have him as a companion. Enjoy him and keep playing Genshin Impact!