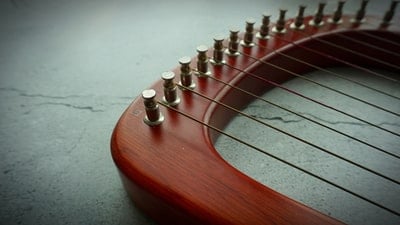 Warning! This Venti Genshin Impact Bio contains spoilers for Archon Quest Prologue and beyond. Read at your own risk.

Venti as a playable character is one of the most useful support characters in Genshin Impact (which is part of the reason so many players want a Genshin Impact Venti account). From an exploration standpoint, charging up his E skill leaves a wind updraft. That makes climbing either trivial or easier. Despite its 15-second cooldown, it has an advantage over Albedo’s elevators or Xiao’s jumping ability. The former needs space for the flower to form, and the latter needs his burst to be active first. Venti can use his E skill wherever he can stand.

In battle, his Burst is the one that excels. While his E skill can create gaps by leaving smaller foes helplessly floating slowly down, Wind’s Grand Ode totally incapacitates them. It generates a black hole within swirling winds, sucking up enemies while dealing Anemo DMG. Due to the nature of the Anemo element, this is a prime opportunity to initiate the Swirl reaction, dealing additional damage.

With his 4th Ascension Talent, he can even recharge energy for himself and his team. Though it’s only for the character who uses the element to cause a Swirl reaction, that’s still a big help to making Elemental Bursts available again.

Until now, no character can match Venti’s usefulness in both exploration and battles. Sucrose can be a close second, but she can’t help with exploration. Well, she can make up for it in other ways. At any rate, Venti is surely a character needed for all kinds of activities.

Not much is known about this wandering bard. Mondstadt citizens find him in various taverns, performing for drinks. His youthful visage doesn’t let him buy alcohol, you see. This is just one of the ways he can circumvent that particular problem.

Venti sometimes sings rather irreverent songs about the country’s Archon, Barbatos. Sometimes it would be one where Barbatos replaces the Cryo Archon’s scepter with a hilichurl’s club. Other times it would be about Barbatos supposedly forging the Geo Archon’s signature for prank contracts. As a country loyal to its Archon, they usually frown upon these songs. All Venti has to say is something to the lines of, ‘who says they’re not true?’.

Of course, no nun or normal citizen can or will ever find proof of these deeds from thousands of years ago. Then again, behind Venti’s smile, he’s just pulling the wool over everybody’s eyes. They were all made up by him, after all, usually when he’s drunk.

Yet, underneath his frivolous bard persona, therein lies the Anemo Archon, Barbatos. Venti is the mortal guise he took on, in memory of a dear friend. Barbatos was once a wisp of the wind under the dictatorial rule of the former Anemo Archon, Decarabian. He met and befriended a melancholic bard longing to see the sky, as Decarabian put a barrier of winds around his city.

No mortal could go in or out, but this tiny elemental wisp who brings hope somehow obtained an eagle feather for his friend. Soon after, a rebellion against the Archon started. The friendly bard, along with a few friends, (Amos, Decarabian’s lover, and what looks like a Ragnvindr ancestor) fought for freedom. Barbatos watched as the rebellion won and the old king deposed.

Unfortunately, he never got to give his gift to his friend, as the latter had fallen during the conflict. Due to Andrius, the other candidate for the position of Anemo Archon, stepping down, he was the one who took the seat. With his newfound power, he took the form of his friend and ruled Mondstadt.

Although, ‘rule’ isn’t exactly the right word to use. Barbatos did level mountains and sweep away the blizzard plaguing the land (with a little help from Andrius), but he left his people to their own devices. He didn’t want to become another Decarabian, though being absent or asleep for long periods isn’t a good example to follow either.

Much of his time as an Archon was spent in those exact states. At one time he woke, though, he found his beloved city under the corrupt rule of the aristocrats. Under the guise of Venti, he met and befriended Venessa, who would become the Dandelion and Liontooth Knight. She is also one of the few mortals given the honor to ascend to Celestia, but that’s a different story. With Venessa’s help, the aristocracy was dismantled and the Knights of Favonius started as an organization.

Despite his absence, Mondstadt remains loyal to its Archon, and even if Venti was absent, he still watches over his people. At the beginning of the game, Venti was awake and trying to solve the Stormterror problem before the Traveler even got involved. Also, it was only through his help the whole incident was resolved. Sure he did get his Gnosis stolen at the end of it all, but he never regretted his choices and involvement.

Furthermore, even if a majority of his power was taken away, he was able to lay to rest the adventurer Stanley’s soul. Even if the Mare Jivari, where Stanley fell, was a windless place, he was able to do so and comfort Hans Archibald. Venti was also the one who played the flute and calmed a yaksha’s soul, suffering from the karmic debt he incurred.

Venti may be a Gnosis-less Archon and the weakest of the Seven, but that wouldn’t stop him from accompanying the Traveler across Teyvat.

How Did Venti Get His Vision

After the events of the Prologue in Genshin Impact, Venti confesses that he’s only carrying around a glass bauble. He shaped it to look like a Vision, but it’s not actually one. During the meteorite event where various characters’ Vision glow near a shard, his ‘Vision’ wouldn’t glow. The majority of his power came from his Gnosis, which La Signora, eighth of the Fatui Harbingers, stole at the end of the Prologue chapter.

For now, there is a big mystery surrounding the relationship between Gnoses and Visions. Venti had said that Vision-bearers are those with the potential to ascend and become a god. However, in his own origin story, he had never mentioned bearing a Vision at all, though he was an elemental wisp at a time. Venessa too had no mention of bearing a Vision, yet she ascended right where the tree at Windrise is.

Furthermore, Gnoses have a clear chess symbolism. The shapes follow western chess where Venti’s looks like a queen and Zhongli’s looks like a rook. That presents a problem, as western chess only has 6 distinct pieces (pawn, rook, knight, bishop, king, queen). Chinese chess has 7, while Japanese chess (shogi) has 8. Being a Chinese game, it’s likely it will follow the pieces of the former.

If the Archons, who are gods in-universe, are represented by chess pieces, who is playing the game?

However, that’s a question for the future. The game isn’t even a year old yet, so there’s more content in the future that could hopefully answer that question. In any case, keep on enjoying Genshin Impact, whether by playing the game or enjoying fan-created works!