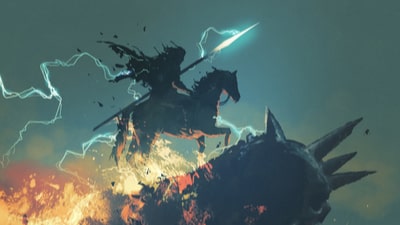 Xiao is the first Anemo character in Genshin Impact centered around dealing damage instead of supporting others. With his spear in hand, he vanquishes all evil with his agile moves and skills. Unlike other characters, Xiao can do a plunge attack at any height without taking damage. For the other characters, at a certain height, they start taking damage even with a plunge attack, and can even die if done too high.

His Elemental Skill, Lemniscatic Wind Cycling, makes him do a forward thrust while surrounded with Anemo energy. It deals Anemo DMG and has two charges, three with a constellation upgrade. What makes it unusual is that Xiao can use it while airborne. It lets him dash forward while gliding (save a bit of stamina) or hit a Ruin Guard’s vulnerable core. That is if you have his Burst active.

His Elemental Burst, Bane of All Evil, is where Xiao dons his mask, letting loose the power that earned him the title ‘Conqueror of Demons’. In this state, his normal attacks deal Anemo DMG and he has increased jumping ability. With the latter, he can initiate plunging attacks by jumping. The downside is that as long as it is active, his health decreases by a set percentage every second.

You’ve probably seen videos of Xiao dealing insane damage or one-shotting bosses. With a good healer and a critical build, you can reach that kind of damage as well. Sure, he does need a 5-star weapon, the Primordial Jade Winged Spear, for optimal damage. However, some of the 4-star weapons will do. Players who want to get him in their team without pulling might look for a Genshin Impact Xiao account online.

Xiao, as gleaned from his titles, is a guardian adepti tasked to protect Liyue from lingering hostile forces. The war gods raged against each other left behind these traces of resentment, as gods never truly die. This yaksha has tirelessly fought against them alone, as his companions have died or disappeared. Legends say that some fell into corruption, others fought with each other, and one went mad and was never heard from again. Since then, he has always fought alone.

All the fighting has led him to incur karmic debt, which is why he is aloof and distances himself from mortals. He has also hurt mortals when they get too close to his fighting, though he never means to. Those are his reasons for distancing himself, though deep inside he’s a gentle soul. His war is invisible and never-ending, so mortals do have to stay away.

Though he looks like a young man, his age is close to 2000 years old. He was not called Xiao throughout all those years. It was a name given by necessity to protect him. You see, he was once enslaved by a cruel god, and made to do unspeakable acts. Morax, the Geo Archon, defeated that master and gave the yaksha another name to protect him. Since then, he has used the name Xiao and pledged his service to protect Liyue from harm.

His fight with the defeated gods’ lingering traces of resentment and hate incur a karmic debt on him. As he fights, his soul gets tainted with these negative feelings. The only way to destroy them is to accept them like so. The amount he has gathered over the years should’ve corrupted him beyond all reason, yet he feels no hatred nor resentment. Having lived for thousands of years, any karmic debt is a blip in his memories. No debt is great enough that can’t be paid off with time, either.

One time, as he wrestled with the pain and agony of his debt, someone playing the flute dispelled the pain and gave him peace. It played through the wind, on and on until dawn. He was curious as to who was playing but had a hunch it was another Archon.

Throughout his history of fighting and wrestling with karmic debt, there was not one place he could call ‘home’. He just leaves the current battlefield into the next. Since the Liyue Qixing is aware of him, they set up a place to support him covertly. That resulted in the Wangshu Inn, a headquarters or base of sorts for the lonely yaksha. Once in a while, he stops by and the inn gives him a bowl of Almond Tofu. The dish’s texture reminds him of the dreams he once had to devour, something he missed and liked.

How Did Xiao Get His Vision

Having lived such a long life, Xiao had forgotten how he got his Vision. A momentous event for humans is just the beginning of his everlasting fight. Then again, as one of the illuminated adepti, maybe the rules of humans getting a Vision don’t apply to him. At any rate, even as he is bound to his duty to protect Liyue, like Jean, he protects the freedom of the people. That fits the idea of an Anemo Vision wielder.

Perhaps that is why the flute he heard that one time had such an effect on him. One of his trailers confirmed that it was Barbatos/Venti who played the flute at the time. A protector of freedom is also a servant of the Anemo Archon, though Xiao’s being an adepti kind of muddles things.

What he does remember is that a majority of Liyue festivals fall on the days where resentment and hatred spike. The worst of it happens during the Lantern Rite, which is why he hates the event. He dances his Nuo Dance of Evil Conquering and feels peace as he watches the lanterns float to the sky.

In conclusion, Xiao is the biggest tsundere (gruff, tough outer shell hiding a soft, gentle inner core) in the Genshin Impact. He does care about humans a great deal, but his circumstances won’t let him get close, so he chooses to keep them away.

Be sure to check out some of our other Genshin Impact Guides!