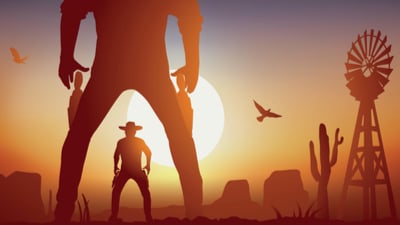 Have you always harbored secret (or not so secret) desires to hunt down wanted criminals like an absolute legend in the Old West? Well, if you have, then this is one surprisingly applicable article to you! If you haven’t, stick around anyway! I think you’ll like trying and learning what we’re going to go over today. Red Dead Redemption 2 is one of my personal favorite games, and part of that is the sheer depth of it. Just when you think that there couldn’t be another fun thing to do, another little nugget of gold to play, you find something new. One of the best things to do that a surprisingly large number of players haven’t experienced is becoming a Bounty Hunter! If this sounds fun to you, here’s some great news: this is an entire guide based around becoming a Red Dead Online Bounty Hunter! Read on for more!

Honestly, if you’re asking this question, you might want to reconsider your life choices. Here’s why: because it’s a Bounty Hunter and that’s awesome. It’s as simple as that, really. It’s full of risk and excitement and with sometimes huge payoffs! Okay, onto the next question!

How Do I Become a Bounty Hunter?

There’s one difference between a gun-wielding maniac and a law-abiding justice maker, and that difference is a license. To become a Read Dead Online Bounty Hunter, you need a license. Don’t worry, this is a very simple process. If you were a part of the original gang back in the day, you got one for free for linking a Twitch Prime account with a Rockstar Social Club account. Now, this option is no longer available, but the process is very simple.

Here’s a step by step guide on how to start: Hop, skip or jump down to Rhodes. There, you’ll find the “Legendary Bounty Hunter,” which is a chap named Sheriff Gray. You’ll trigger a cut-scene by making your way to the yellow icon on the map, and good ole’ Sheriff Gray will offer you a Bounty Hunting License if you’re willing to fork over 15 gold bars. Don’t have the cash (or, rather, gold)? No worries! You can always return later with some more money.

How Do I Get Bounties?

Okay, you’ve got your license, you’ve got your weapons, and you’ve got a super-cool catchphrase you’re going to say when you acquire targets. But… what now? What’s your next step? You can’t just go wandering off into the middle distance, kidnapping people until you get lucky and find someone with a reward! Here are the two simple ways to get a bounty:

Pick up a standard bounty. This is by far the most obvious way, and it’s remarkably easy. You just wander into your friendly local neighborhood sheriff’s office and find the bounty boards located nearby. Pick one, and go for it! If you feel like you’re in the gruesome mood, you can always dispatch your targets, but if you’re looking for more money, bring them in alive.

Get a legendary bounty. There are pros for legendary bounties, like a lot greater reward. However, there are also cons: namely, you’re going to have a lot more work involved. These can be delightful to go on with a posse, though be careful—all the rewards will be shared. The legendary bounties can be replayed following a nice cool-down.

Well, as you probably guessed it, you’ll get better at Bounty Hunting the more you do it. If you’re looking to get a jump on it, here are some basic pointers!

Bounty Hunter plus Old West equals awesome. Honestly, it’s just that simple. If you play Red Dead Online, you should try being a Bounty Hunter. Sure, you might need a bit of up-front money, but it’s so worth it. Plus, as I’m sure you know, Red Dead Redemption 2 is great at keeping things fresh and unique, so it surprisingly doesn’t get boring even after a long while! When I take villains in now, I still like doing it.