How to Get WoW BfA PvP Gear

Although it’s safe to say that the PvE aspect of World of Warcraft has overshadowed PvP since vanilla, some players still prefer the good ol’ Player-versus-Player encounters. Now, these battles most definitely require skill, but you’ll also need some pretty good gear to excel in PvP.

So, how can you get WoW BfA PvP Gear nice and easy? Simple, by focusing on 5 particular activities – World Quests, Weekly Conquest Cap, Emissary Quests, Weekly PvP Cache and Arena matches. All these things are quite solo-friendly as they don’t require you to engage in PvE groups. Or in short, these activities should be your top priority if want BAttle for Azeroth PvP gear fast.

Improve your WoW Gameplay from these guides

And here’s a more in-depth breakdown of each of these activities.

What are the top 5 things to do in BfA to get PvP Gear fast?

Keep in mind that I’ve listed the following methods in no particular order of importance.

Make sure to check your Emissary Quests via the world map on a daily basis to not miss any upgrades. Or in other words, if you do stop any upgrades – do them right away! All that you’ll need to do is finish a couple of World Quests anyway.

This determines what kind of item level gear you’ll be getting in the weekly cache. Obviously, this is a straightforward method for obtaining PvP gear. That’s because you’ll simply have to get the highest rating possible (on a weekly basis) to get the better gear off the PvP cache.

Now, although the focus would be on PvP World Quests, don’t neglect any decent PvE quests that might pop on your map. Just don’t forget to prioritize World Quests that offer gear, which has PvP-friendly stats.

If you want to get your hands on PvP gear fast and easy, simply play more Arena matches, that’s all. Win or lose, if you dedicate enough time to Arena games you’ll be o your way to neat PvP gear. At the end of each Arena event, you’ll be able to loot gear (if you’re lucky enough) depending on your PvP rating.

Yep, just cap out your conquest points for great and easy-to-acquire PvP gear! Thus, you’ll be getting 1 preset item each week. Even better, your Conquest cap is calculated from all brackets, not just from 2v2, 3v3 or so.

Now, I’d like to shine a light on the PvP Season 1 and Season 2 changes that were introduced in Battle for Azeroth.

Check this out on World of Warcraft

What kind of changes did the PvP Season 1 in BfA introduce?

The 1st PvP Season of Battle for Azeroth came with new reward tiers and item levels. These item levels related to the items that you receive as rewards are directly tied to your personal rating. And to make your life easier, Blizzard has already explained the item level rewards for all the tiers and ratings in a blue post.

Now, this is the rating-based tier system that was introduced during the first PvP season of BfA. But the PvP system went through a number of additional changes like the disabling of the War Mode that can be done in any place where your character feels rested in. There were also new reward bonuses for this mode that become accessible only if your faction has been outnumbered during the previous week.

These War Mode bonuses mean that you can gain up to 30% more experience and rewards from doing quests. There’s also a new War Mode-specific quest that requires you to kill 25 max-level players from the enemy faction. However, it’s only available if your faction was outnumbered the previous week. And on top of that, strongboxes now offer better rewards even for unrated PvP battles.

For more World of Warcraft, check this out: How to Unlock World Quests in BfA for WoW Plus More

What about the changes in the second BfA PvP season?

Apart from that, the second PvP season of BfA made acquiring PvP mounts somewhat easier. That’s because after you get the initial Vicious Saddle mount reward by filling the progress bar for the first time, you’ll start earning Vicious Saddle for each future fill of this bar. Another new addition is that players now get to choose between several Conquest rewards. If your weekly reward is an Azerite piece of gear you have 4 options to choose from, but in case it’s not – you have only 2 options to choose between.

There’s also a new Sinister Gladiator transmog set for all armor types. And it’s unlocked piece by piece depending on your rating and tier:

Apparently, utilizing Arena games, World & Emissary quests, weekly PvP cache, and the weekly Conquest cap are 5 methods that’ll help you get decent PvP gear blazingly fast. On a side note, these are all PvP-exclusive ways for getting WoW BfA PvP Gear. Feel free to do PvE too if you’d like to use PvP-oriented gear from dungeons, raids, etc. It’s up to you really!

Tell us now, what’s your favorite activity for getting great PvP gear? Leave a comment below with your answer!

ESO Maelstrom Arena Guide – Getting Started and Each Stage 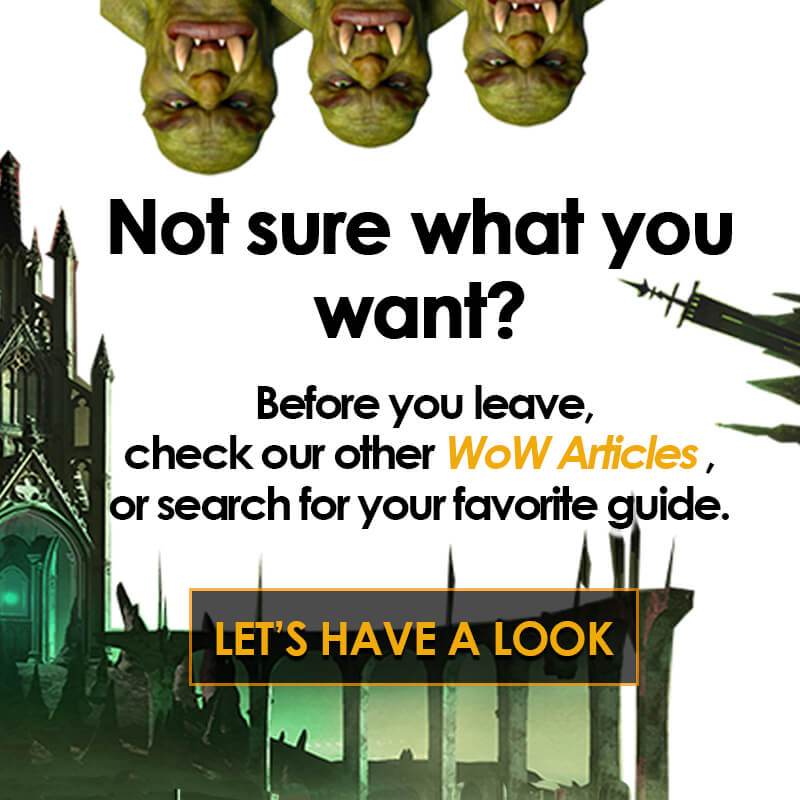