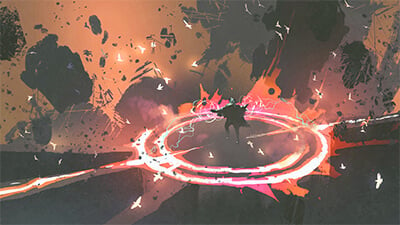 The Frenzy Barbarian is becoming increasingly popular in Diablo 2: Resurrected and players love it for the fast movement speed and added mobility. This build is different from the many casters builds as there are plenty of options, all of which are great. It’s a viable build to go through whatever content you need it for. Another advantage to consider is that Immune to Physical is a bit more rare than elemental immunity. Even with Immune to Physical monsters, we will go through how you can counter that with various gear or your Mercenary. If you’re looking for the best Barbarian Build in Diablo 2: Resurrected, you’ve found the right place.

One of the disadvantages, which I found to be an advantage personally, is that this build is on the simple end in terms of mechanical complexity. It’s a one-skill click-and-run build. When farming, I would recommend you widen your range of locations to keep it a bit more interesting, but I love simple builds that I can relax, listen to some music, and farm mobs mindlessly with.

This build uses Frenzy as its main damage dealing skill and other skills are levelled up to synergize more damage into Frenzy.

Frenzy – With each attack (maximum stack of 5 times) it adds bonus attack speed, greatly increasing the ability of the Barbarian to deliver damage. Some may see a lack of damage with Frenzy, but the Increase Attack Speed bonus makes up for it. It also increases survivability if you have any + Life on Hit, which will be very useful with high Attack Speed.

Weapon Mastery – Depending on which type of weapon you are using, max out the Mastery for better Attack Rating, Damage and Chance of Critical Strike. This will help reinforce the lower relative damage from Frenzy. It allows the user to concentrate on Attack Speed to maximize damage per second output.

Battle Orders – One of the most sought out skills in the game, nothing else gives a boost to your Life and Mana like Battle Orders, recommend maxing this skill out.

Taunt – Put as many points as you can after all the other necessary 1-point investments, as this is a synergizing damage booster for Frenzy.

Find Potion, Find Item – Also 1 point, each as they are very useful ways to grab some extra items. I’ve seen my friends pop High Runes like Gul and Ist from using Find Item.

Leap, Leap Attack – Leap Attack will help to both engage and disengage from battles depending on how tough the content is.

Weapon – Grief is probably one of the best go-to Runeword for a Frenzy Barbarian due to the pure bonus damage. Many people overlook Grief as it doesn’t come with +% Enhanced Damage mod, it instead comes with a flat damage increase. Dual wielding can result in up to +800 flat damage! Or Grief main hand with Breath of the Dying, Death, or Doom are other great choices.

Swap Weapon – Most characters don’t come with shouting skills, so they resort to having Call to Arms in their arsenal, but luckily Barbarians have it inherently. I recommend getting any level, tier of weapons that give +2 ~ +3 Warcries. At level 25, Battle Orders give a whopping bonus of 107% to Life and Mana.

Body Armor – Fortitude is probably hands down the best armor for this build. Enhance damage helps make up for the relatively low damage Frenzy might put out. It also comes with lots of extra Life, Defense and Resistances. It’s relatively cheap compared to other high tier Runewords such as Enigma or Chains of Honor as well.

Helmet – Arreat’s Face Slayer Guard is probably the only Helmet I would consider for a Barbarian. +2 Barbarian Skill AND +2 to Warcries Skills is something you can’t overlook. Every other mod is useful for all situations, increasing survivability is important, and stats such as with Attack Rating, Faster Hit Recovery and Life Leech are crucial.

Gloves – You can choose between Dracul’s Grasp, and Steelrend. I would prefer Steelrend for a bit more damage output, but if you are not leeching enough life when dealing with bigger groups of mobs, I would recommend the Dracul’s Grasp.

Boots – If you are doing enough damage to blow through content such as Diablo (Sanctuary Farming) or Travincal, I would recommend War Traveler’s Battle Boots for the magic find. Otherwise if you’re looking to find more damage, Gore Rider War Boots is a solid choice for Crush Blow, and Open Wounds.

Belt – Similar to gloves you have a 2 options, Verdungo’s Hearty Cord for the tanking, or a String of Ears for more Life Leech. Unless you have many small charms with Faster Hit Recovery, I would recommend Verdungo’s just so that you can face off with high level bosses without too much interruptions to your attacks.

Rings – Raven Frost is a must have for this build, as you don’t want to slow down with Frenzy. The upkeep of high Attack Speed is key to increasing damage output for this build. Attack Rating bonus is highly useful as well. Bul-Kathos’ Wedding Band Ring is another solid choice for the + to All Skills, Life and Life Leech. But in reality Rare Rings with Dual Leech, or Life/Resistance is also very viable.

Amulet – My melee go-to amulet has always been Highlord’s Wrath Amulet. Very important mods such as Attack Speed, and + to All Skills will be hard to beat, unless you can get a nice Amulet with Attack Speed and other form of damage boosters by gambling or crafting your own amulet.

Charms – Absolute best charms would be Max Damage/Attack Rating/Life small charms, but these cost an arm and a leg. I would recommend collecting the 5% Faster Hit Recovery small charms or even Magic Find charms as it’s hard to stack Magic Find with the above recommended gears. I would even try and stacking Poison Damage charms to see if it helps by pass any Immune to Physical monsters in Hell Difficulty.

Mercenary – Mercenary might be the key to making this class and build an invincible boss killing machine. Act 2 Mercenary with MIght will greatly boost damage. I would recommend Reaper’s Toll as their weapon as it has the chance to trigger Decrepify which helps break through Immune to Physical monsters.

Have Fun Playing the Frenzy Barbarian in Diablo II: Resurrected

While you are levelling make sure to take advantage of Natural Resistance to get yourself some much needed + to All Resistance if you find yourself lacking them in Nightmare or Hell before you get enough level to equip all your proper gear.

Frenzy is a good skill to use while levelling in early levels as well, won’t need too much respecing later down the road compared to more late game builds such as Wind Druids.