How do Games Tell a Story? 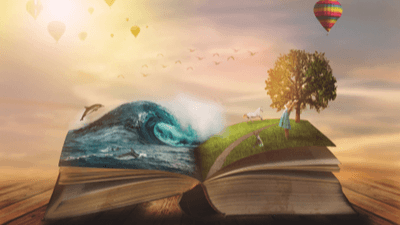 Stories drive games. It gives the player a purpose, direction, and something to do in the game. Every game, no matter how simple, has a story. Even games like Counter-Strike: Global Offensive or Candy Crush Saga has one. Some games present it subtly while others are more obvious about it.

As many stories as there are, there as almost as many ways to tell them. Traditionally, stories were passed down through recitation. One generation tells their stories to the next, and so on and so forth. This created problems, as the ‘Pass the Message’ party game can attest. The stories got corrupted over time and changed as a result.

So people started writing them down. It’s less corruptible, but the material the story is written on can degrade, so if it isn’t taken care of, it can still be lost. Depending on your interpretation, painters and pictures can also tell a story.

The advancement of technology let it move on to digital encoding, though that still has its problems. It also allows people to explore a whole new avenue of storytelling, which is through video games. It lets the ‘listener’ interact with the story’s characters or sometimes has them influence outcomes.

There have been books that do this, the Choose Your Own Adventure books. Tabletop gaming like Dungeons and Dragons also allows players to do this, but players have to do the imagining. With video games, they don’t have to imagine anything.

With the flexibility of video games, more storytelling methods can be explored, and here are the most common ones.

This is the most basic method of storytelling in video games. A narrator, the internal monologue of the player character, or character dialogue delivers the story to the player. Any story-focused game uses this method.

It’s been around since the inception of video games, though it could be because games were primarily text-based in the early years. When graphics became more common, other kinds of methods became an idea.

Direct exposition can be delivered through text, dialogue, or both, depending on the game’s genre and the developer’s purpose and intent. You’ll see this method in the majority of games. Usually, the story is nestled within the ‘main quest’ in RPGs. In linear games, following the prompting of the narration is enough. This sometimes results in something like an ‘interactive movie’ like the Uncharted series.

A better representation of this storytelling is anything made by Telltale Games and Detroit Become Human. It adds another layer because the player can influence how events turn out. Their actions or inactions result in different outcomes for the story. Other similar games are Until Dawn and, more recently, The Quarry.

RPGs also use this method, but usually, they’re less about actions and more about making decisions. Unless the game gives the player a clear choice to do nothing, they always have to decide to do something or another.

This is the subtler way of delivering a story. Some examples of this are Gone Home and What Remains of Edith Finch. In the former, you control a girl who returns home only to find her family gone. She (or you through her) must go around the house to find clues about what happened to them.

With the player character basically alone in the game, there’s no one to talk to, and there is no internal monologue to read or listen to. The whole game is you picking up objects to inspect and piecing together the events that left the house abandoned.

There is some exposition in letters or notes left behind, but that doesn’t give as much detail as the game directly showing or explaining what happened does. This results in players having a general interpretation of the events. However, some context can be missed if you don’t find specific objects.

What Remains of Edith Finch is much of the same, though it has some expositional parts due to the framing of the game. Edith narrates her journey through the ancestral Finch house. As mentioned above, details can be missed if you don’t inspect or look at particular objects. Still, even when she isn’t narrating, looking around can give clues to the Finch family members’ personalities.

The method isn’t commonly done alone like in the first example above. WRoEF’s style is more common, where there is exposition, but additional details are added if you look around. Open-world games can also do this by leaving objects or arranging them to suggest how things happened.

A non-specific example is stumbling across a cabin. You go in, and it’s abandoned and neglected. Going upstairs to the main bedroom reveals a corpse. Now, depending on how the corpse is arranged, you can infer how it died. If the devs lefts syringes nearby, then it’s an overdose. Blood splatters imply the victim was murdered. It’s these little details that give stories a little more depth.

Some games tell stories through item descriptions. It’s still a part of environmental storytelling because where you find the item can be significant. Dark Souls is chock full of this, and so is the Silent Hill franchise. Most games use this method, which is evident if you are willing to look around and take in the sights.

A more advanced method for item description is description evolution. The player’s actions in the game can change how the item behaves or looks. In turn, how the player character or narration observes it also adapts. It’s something you’d likely miss if you don’t stop and look at your inventory once in a while.

Usually, this is done for bonus material, such as short stories that act as an epilogue to the game’s storyline. However, some games use external media to deliver the game’s story. One of those is Overwatch. Blizzard uses trailers, videos, comics, and other media to present the background of the setting and the main characters’ stories.

It makes sense, though, because the gameplay doesn’t have space for direct exposition. You can find some pieces of environmental storytelling, but those give too little detail to tell a complete story. The game can be enjoyed without knowing why the characters fight or what they are fighting for, but you can get a deeper sense of appreciation if you do.

Valve’s Team Fortress 2 employs a similar strategy to tell the game’s story. Comics, videos, and hidden links in the update pages of the website all contribute to this. These two games have almost the same gameplay, too. CSGO employs the same method.

A More Powerful Way of Storytelling

All these methods give games the ability to deliver powerful messages meaningfully. Though some people still think they make people more violent, many game developers want to convey a meaningful message.

It’s more evident in independent developers. Big-name publishers care more about the business aspect, making the game a glorified ad for microtransactions. Any message the developer wants to convey becomes overshadowed by the constant notices to ‘buy, buy, buy.’

In contrast, indie devs have more freedom of expression to focus on getting their message across. Look at Undertale or, more recently, Omori. I know they’re on different ends of the spectrum (depending on which route), but these games use storytelling methods to deliver their messages very well.

Many players tend to skip the plot for the action, and that’s valid. However, knowing the story will increase the appreciation of the game. I don’t mean you should obsessively check every nook and cranny for plot tidbits. Just be more observant of possible stories the environment may tell you. Listen to the NPCs and read a little between the lines. You might find the game to be even better then!

Hope this helps in increasing your appreciation and enjoyment of video games!