Melee Builds are a Trap for Forbidden Sanctum Challenge 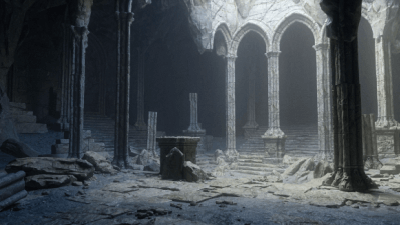 Melee builds in Path of Exile have been at the bottom of the barrel for the past Leagues due to the existence of much more efficient ranged setups. After hearing the community’s plea for changes, GGG has supposedly made some buffs to the close-range playstyle. Unfortunately, these tweaks are not enough to make the Melee builds viable for the current League mechanic.

The Sanctum Challenge is the newest League mechanic where players are transported into the Templar Shrine. The instance is composed of 32 rooms divided into four floors. Mini bosses can be encountered at the end of each room, and unique bosses will be waiting at the end of each level. While many things are going on in this new challenge, the most crucial aspect would be the Resolve meter.

The Resolve bar is your HP for each Sanctum run, separate from your character’s health pool. Dying in the instance will not end the challenge, but losing all your Resolve means your run is over. The fundamental strategy in the Sanctum is to manage and monitor your Resolve so you can get to the end of the instance and get all the great loot.

In line with GGG’s vision of improving Melee playstyle, devs have introduced a way for close-range builds to have a slight advantage in their runs. In the Sanctum challenge, you lose less Resolve the closer you are to the source of the damage. This might sound good on paper, but its applications in fights are minimal.

While Melee builds receive less Resolve damage, other features would make this effect less efficient. In rogue-like games, it is safer to avoid the damage rather than tank them, which should also apply in Sanctum challenges. Playing at a close range gives you less room to dodge, so it would still be ideal for playing at a specific field.

Another thing that would hinder melee play in Sanctum are the telegraphed moves. Most mobs and bosses in the challenge will have an indicator of the direction and AoE they are about to attack. If you are playing at a close range, these telegraphs can be harder to spot, especially when visual clarity is a meme in PoE. If you cannot spot the indicators, you will have a hard time dodging the attacks.

Defense builds also do not provide any advantages to your runs. While your DPS helps you clear mobs much faster, your defensive stats do nothing. Armor, Evasion, and Shield Energy only mitigate the damage you receive on the character’s HP, but the Resolve meter does not benefit from this. Since your defense gear doesn’t matter, it is ideal to dodge the attacks, which is not the main playstyle of Melee builds.

The main issue with Melee is the lack of reliable damage scaling. This build relies on onng excellent survivability in exchange for less damage, which is unsuitable for the current League mechanic. Since your defense stats mean nothing for the Resolve meter, you should dedicate your focus to clearing rooms as fast as possible. Melee builds have lower DPS, which makes defeating bosses slower and prone to more mistakes.

What If You Want to Play Melee?

Playing Melee in the Sanctum Challenge is certainly doable, but you will have a tough time in certain parts. You must train your mind that defensive stats do not mean a thing, so you must dodge every attack from close range. Melee players must also have a sharp eye to spot the telegraph attacks.

However, to make Melee builds genuinely viable, you will need to play some form of ranged attack. Totems are some of the ideal skills to serve as a mid-range attack, but they tend to do lower DPS. It would help if you considered taking other abilities, such as traps.

What Would Be the Ideal Builds for the Sanctum Challenge?

Like any PoE challenge and content, range play is your best option. They have more DPS and can see the area more clearly. They also have more distance between them and the source of damage, which creates more room to dodge and move accordingly.

The best ones to choose would be the summoning types. Builds that can summon totems, minions, or auto-attacking spells have a massive advantage in the Sanctum since they can let these things attack while players dodge telegraphs. In summary, builds dealing with high DPS while efficiently avoiding attacks would be the best pick for this league’s challenge.