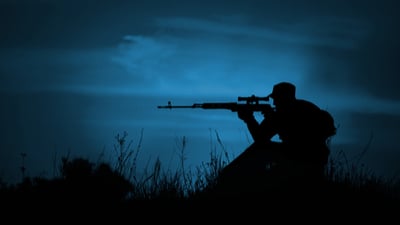 Call of Duty: Cold War. Hold on. Let’s stop right there. Think about that first sentence, and think about how it could be even more fun to talk about. Here’s how: talking about CoD: Cold War weapons. And guess what we’re talking about today! That’s right! In this article, I’ll take you through all the best weapons in CoD: Cold War from five different classes! Without further ado, let’s hop straight into this!

Who is this CoD: Cold War Weapons Guide For?

If I’ve seen it once, I’ve seen it a thousand times. I’ve seen plenty of “best” lists, where you fire it up and discover that the writer basically just talked about their favorite guns for one play style, and that helps basically nobody. But this article will be different, because these guns aren’t geared towards one person or play style or experience level. This is for everyone. I’ll make sure to include a bit of something for everyone in here, never you fear!

Go big or go home, and what better way to go big than slaughtering your enemy with a single shot? Back in the glory days, sniper rifles were godly. They were unbelievably strong and overpowered. Unfortunately for everyone who used them and fortunately for everyone who liked balanced gameplay, this changed with time. Now, sniper rifles are still beastly, but they aren’t quite the monsters that they used to be.

The best sniper rifle is the Pelington 703. This bolt-action beast boasts a solid fire rate, but most importantly, if you hit someone anywhere above the waist once, it’s game over for them. It packs some serious firepower, and if you like one-shot, one-kill action, this is a gun you’ll like. To make it better, throw on a Front Grip, Tactical Stock, Quickdraw Handle, 25” Extended barrel and Stabilizer .308 optic. Match it with a good weapon for close range when you inevitably get jumped, and you’re golden.

It’s dangerous asking this question. There’s about a thousand different opinions, but from personal preference, stats, and popularity, I’m going to have to give the crown to the Krig 6. It’s just a balanced, high-quality gun that doesn’t have any major weaknesses. I’ve heard it called the “best gun in the game,” and that might very well be true. Though some of the other guns might thrill you, like the ever-classic AK-47 (and come on, who doesn’t like that?), this is just simply one of the best weapons in CoD: Cold War. One of the biggest advantages that this gun has is that you can virtually forget about recoil if you slap on a Muzzle and Underbarrel. It’s not quite point-and-shoot, but it’s as close as it gets.

I’ll shamelessly admit that I love shotguns. I know, some of you hate people who use shotguns in games. They put out ridiculous amounts of damage, which is pretty much the only factor any shotty-user cares about, and that’s what makes the Gallo SA12 a freaking beast. It’s lethal, powerful, and consistent. If you want close range power, it’s one of the best weapons in Cod: Cold War. The only downside is that you’re going to need to be smart with reloading, because it admittedly takes a while. Full send!

Do you have great aim? If the answer is yes, or if you want the answer to be yes, use a Tactical Rifle! As someone who’s played his fair share of Call of Duty over the years, and someone who likes to keep updated on Call of Duty weapons, I can confidently say that I hate playing against skilled players with these. You need a good amount of skill to use these well, but if you can pull it off, you can absolutely devastate!

The best Tactical Rifle is the M16. Though the Type 63 and DMR 14 are great runner-ups, the M16 is just the king. It’s got 3 round bursts, but with a minimum delay between bursts, and with great damage, it can shred. But be ready—you’ll probably need to practice and get very comfortable with it before you’ll see the results you want.

What’s the Best LMG of the CoD: Cold War Weapons?

In an article about the best Call of Duty: Cold War weapons, you’re going to have to expect a bit about LMGs. There’s a certain, undeniable charm about lugging one of these beasty, heavy fellas around. You’re not going to be even close to maneuverable, but you can mow down your enemy like a tank. In the right hands, used well, these can take down entire squads in a way that most weapons can’t.

The best LMG is the RPD. It’s a full auto, as one would expect, but it’s got a surprising amount of mobility. Though it’s not going to amaze anyone with it’s less-than-incredible ammo reserves, it will amaze you with its performance. If you’re going to use it heavily, consider throwing on some mods to make it easier to spray and spray and spray and pray.

There you have it, gang! The five best weapons in Call of Duty: Cold War. It’s not a complete list, but we believe that these are some of the best guns you can use right now. With some tweaking or just used as stock, these beasts can dominate on the battlefield in the hands of the right player.