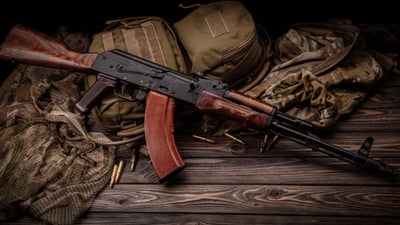 The AK-47. Perhaps the most iconic weapon of its time, the AK-47 can be called many things. The AK. The beast. Maybe you just chuckle menacingly when you think about it. But whatever your term for the AK-47, it’s a golden classic of the weapons world, and for good reason. But, in Call of Duty: Black Ops, does it live up to its name? I’ll keep it simple. Yes. Yes, it does. Throughout this article, I’ll be taking you through everything you need to know about this awesome gun, and (more importantly) I’ll be guiding you through the highest rated and most successful Cold War AK-47 setup.

Just to get a brief backstory on this gun, it was created by a chap named Mikhail Kalashnikov (say that fast three times) in the late 1940s. It was promptly used by the Soviet Union until 1974, but it’s still in use by a lot of military forces in the modern era. It’s rugged, strong, powerful, and pretty near indestructible. It has a certain mystique associated with it, a glorious halo around it, that has only grown with time. It’s been just as famous in the Call of Duty series, with a series of appearances that made this high-damage weapon an icon.

Those of you who have read these articles before know the drill. This is normally the part where it’s like “there is no best, play styles vary, blah blah blah.” For most guns, that’s truly the case. Different setups make the gun better for different loadouts. Well… today, we’re going to do something different. We’re just going to keep this simple and tell you the all-time best Cold War AK-47 setup. Ready? Okay, let’s roll!

First, for your Muzzle, use the KGB Eliminator. For the Barrel, use the 18.2” VDV Reinforced. For the Underbarrel, slap on the Spetsnaz Grip, and for the Handle, go with the GRU Elastic Wrap. Finally, for the Magazine, wrap it up all nice and pretty with the VDV 50 RND Fast Mag.

Why? Why those specific attachments? What about them make up the best Cold War AK-47 setup? I’ll tell you, but first, you need to know something important here.

This combo of attachments is only available upon hitting level 53. What does this mean? It means that for quite a while, you aren’t going to have access to this package. Just wing it. It’s worth the payoff.

As far as the specific benefits, here we go!

KGB Eliminator. First, you get props for having something with such a cool name. Secondly, this bad boy will help hide you on the minimap because it packs an 85 percent boost in muzzle flash concealment, with a small boost (about 17 percent) in vertical recoil control. Tragically, you’ll lose about 10 percent shooting move speed, and 10 percent horizontal recoil control.

18.2” VDV Reinforced Barrel. While at a small cost of 4 percent sprinting move speed, and 20 percent aim walking movement speed, the 18.2” VDV Reinforced Barrel boasts a magnificent 100 percent effective damage range, and 40 percent bullet velocity. This ends up being about a 4 hit per enemy player to take them down. We considered the 20” Spetsnaz RPK Barrel, but we decided against it because of the hit to recoil control. Don’t believe us? Give it a shot!

GRU Elastic Wrap. Though this name is considerably stupider sounding than you would expect, it’s well worth it. You’ll get a 30 percent faster ADS time, ability to aim while going prone, and 90 percent flinch resistance. Unfortunately, this one does come with a cost—specifically, 10 percent shooting move speed and 15 sprint to fire time.

VDV 50 RND Fast Mag. You get 50 rounds. That’s pretty much as complicated as this one gets, but if you’re curious about the specifics, here they are! You’ll get a 67 percent increase in magazine ammo capacity, max starting ammo, and ammo capacity. You’ll also be 35 percent faster at reloads, even though you get a cost of 25 percent ADS time.

The AK-47 is a great gun, and it’s even better in Call of Duty: Cold War. Today, we only included one top Cold War AK-47 setup, and there’s a reason: it’s literally all you could ever need. It’s not quite overpowered, but it’s close.  The accuracy is awesome, the damage is great, and the recoil is fine. Plus, you get the bonus of being able to use the AK-47. You can obviously change minor things and tweak this setup to fit your exact standards. Normally, there’s a lot of play in that, but for this one, I’d avoid changing too much. The setup here is just too good to mess with it too much, in my opinion.