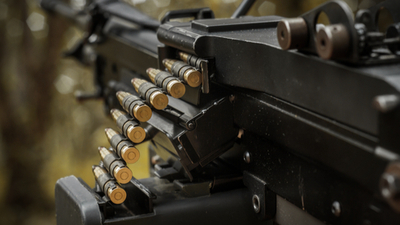 Think about all the great guns you’ve ever played Warzone with, and stop me when you’re excited about these words. Great damage. Great rate of fire. Great long-range performance. Great mobility. Sounds, well, great, right? Wouldn’t it be cool to have a gun in Call of Duty that has all those traits, and is fun to use in-game? Well, I have some exciting news for you, my gaming friend. The gun that fits all those factors is the MK9 Bruen. Fast, deadly, and inherently awesome, the MK9 Bruen is the LMG that will launch you to the top of the leaderboards. Is that a guarantee? Of course not, but in the hands of a capable gamer, the MK9 Bruen can absolutely shred your opposition in record time. In this article, I’ll take you through everything you need to know about this beast of a gun, from how to get it to how to make the best MK9 Bruen Warzone Loadout.

How do I Get the MK9 Bruen?

Before you can ask any questions about getting the best MK9 Bruen Warzone Loadout, you need to actually land yourself the MK9. It’s one of the newer Warzone guns, and honestly, one of the best once you put some work into it. But first, you’re going to need to accomplish a rather difficult challenge. Here it is: you need to get three kills when an enemy is near smoke with an LMG in 15 different matches.

Read it again, and realize how long this is going to take. Yes, my friends, this is one of those challenges that will take you quite a bit of grinding to get. Don’t think for a second that this is a fifteen minute challenge, because it isn’t. Believe me—it’s going to take longer than one might expect. Three kills? Easy. With an LMG? Easy. 15 different matches? Easy. When the enemy is near smoke? Less easy. Put it all together, and you might end up taking quite a bit more time than 15 matches to get this one knocked out. It is, however, completely and totally worth it.

The best way to beat this challenge is to equip smoke grenades and get into a small map playlist. Just keep throwing grenades and spraying into the smoke and you’ll eventually get your kills. Dumb sounding, yes, but effective—especially in Hardcore modes, where you’ll only need two shots to land a kill. The other way, the way that I personally recommend, is to throw on a thermal optic in an objective-based mode, huck a smoke grenade onto the objective, and lay waste.

We made it, fellas. We got to the meat of the article, the part you’ve all been waiting for. Here’s how I’m going to do this. I’m going to give you what you need, and then explain why. Sound good? Let’s goooooo.

Why you equip this: Like all guns, the MK9 Bruen has strengths and weaknesses. This is a way to alleviate those weaknesses and emphasize strengths. The suppressor will keep you hidden while extending your effective range, the XRK Summit will increase your range performance, the Corp Combat Holo Sight is a solid optic, and the Tac Laser and 60 Round Mags increase your mobility and increase your aim-down-sight speed.

Sometimes, you want to lay waste and be the Harbinger of Death to your enemies up-close. That’s cool. I understand that. Well, if that’s you, the MK9 Bruen has a great up-close loadout too!

Equip a Tac Laser, No Stock, Monolithic Suppressor, Bruen 18.0” Para, and 60 Round Mags. Also, for Perks, use Amped, Ghost, and Cold-Blooded.

Why You Equip This: It’s no secret that the MK9 Bruen can devastate up-close just as well as it can far away, but it’s always a good idea to strip down your weapon as much as you can for close-range warfare. When every millisecond counts in that frantic, fast-twitch gameplay, you need to prioritize speed and mobility. This MK9 Bruen Warzone Loadout does just that.

As far as your Perks go, Cold-Blooded and Ghost will keep you off thermal optics and radars, and Amped will decrease your weapon swap times. The last thing you want is to get stuck with no plan when you run out of ammo.

The MK9 Bruen is one of the best guns in Warzone. It devastates the opposition, and you might even get angry messages after the game for using it. It has only a few weaknesses, and a whole bucket full of strengths. These MK9 Bruen Loadouts are great templates to start with, but you might end up finding that you like a slight variation, and that’s completely okay. At the end of the day, you need the gun to feel right in your hands. If it doesn’t feel right with these, try little changes until it feels smooth and easy. And don’t forget to demolish your opposition!