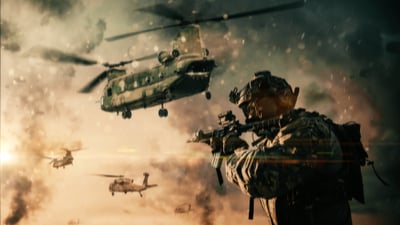 Call of Duty! It’s great, right? Go around shooting stuff and trampling your enemies beneath your digital feet? Roaring in laughter as you defeat the same dude for the fifteenth time in a row and you know that he’s raging but he still can’t beat you? Maybe you know this feeling, and maybe you don’t! But if you don’t, I have a question for you. What if I told you that your guns might be holding you back? Now, if you’re a gamer, this probably is no news to you. Picking the right weapon can mean the difference between winning and raging, and nobody likes raging. Especially in Call of Duty, it matters. A lot. So you need to know the best Call of Duty Modern Warfare guns!

Also Check Out: The Best Warzone Settings for Console

Now, unless you spend tons of time in the game, you probably aren’t going to guess this right off the top of your head. Don’t worry! I’m here to help. I’ve collected some of the most successful, highest rated, most brutal, most overpowered, and most fun and overall best guns to use in Modern Warfare, and I’m going to share this list with you.

Will Choosing the Best Call of Duty Modern Warfare Guns Make a Difference?

Yes, it will. Picking the right loadout is crucial to success. Now! I want to clarify something here. Your weapons are only a tool. If you’re not good at the game, choosing a different weapon probably won’t suddenly make you a god. I say “probably” because I’ve seen it happen, but most of the time, picking the right loadout will boost you to another skill level. Picking up one of the best Modern Warfare guns is simply not going to make you the best player in the lobby. Good? Good.

Ah, yes. Spray and pray. The bread and butter of the online multiplayer world, where you don’t have to be crazy accurate with every shot. It’s an easy play style to learn, and, admittedly, quite a bit of fun. What you’re looking for here is a gun with low recoil, a lot of damage, and a lot of bullets coming out.

First: Check out the MP7. Yeah, yeah, I know. The MP7 sucked in the other ones. Well, not anymore! Give it a shot (ha, pun!). Fortunately for the MP7, it has become a great choice for weaponry in the current game.

Second: You can’t go wrong with the Kilo 141. It’s a basic, consistent gun. It’s not gonna amaze anyone. Nobody is going to be astonished that you’re using the Kilo 141. It’s just a good gun all around. Not great! But good in all ways, and that’s pretty much the same thing as a great gun. Also, the Kilo 141 gets bonus points because it has a big magazine (50 or 60 rounds), so you get to do a lot of spraying and praying.

Third (and a personal favorite): The M4A1. It’s one of those guns that has a fantastic reputation for good reason. It’s just excellent! If you had never played before and I was going to advise you to try one gun, it’d be the M4A1. It’s got great damage, virtually no recoil, and it pumps out bullets faster than you would imagine. Plus, bonus points: it can be tweaked in the Gunsmith feature. Go for it, my reader friend. It’s worth it.

Look, I get it! I’m a gamer. Spray and Pray wins. It’s fun. It’s easy. But it can get boring. I ran with a Spray and Pray a long time and I tended to do well, but after a while, it got boring! Many of you know what I mean. The same thing, over and over, and even if you do well, it can become monotonous. If that’s you, I’d try a showboat gun! What does that mean? It means trick shots! It means one shots! It means whiffing and dying, and then doing something really cool the next time! It’s exciting, and fun, and challenging. Here’s the ones I recommend:

First: The 725. Ho boy. The amount of people that hate this gun is through the roof, and arguably for good reason. This gun will wreak havoc! It holds just two rounds. Each of those will one-shot you from amazingly far away. This is a weapon that we are going to see nerfed in the future, but for now, just remember that this is one of Modern Warfare’s best guns.

Second: AX-50 Sniper Rifle. Okay, you didn’t really think we could have a showboat gun section without including a sniper, did ya? Snipers are the lifeblood of showboating! Because first of all, it takes more skill to operate a sniper than it does to operate most other weapons, so when you get a cool shot, it feels really good! Second of all, this puppy does damage. Like one-shotting people? Try it out! It’s fun to use, and bonus points, people will despise you for it!

In summary, we’ve gone over some of the best guns in Call of Duty Modern Warfare. If you like to take the practical route, you can’t go wrong with a classic spray and pray loadout. If you’re feeling crazy or like showboating, give the 725 of the AX-50 a shot. Odds are, you might be good at it. At the very least, if you’re terrible, you can always say you’re lagging. Sound like a plan! Okay, get out there!