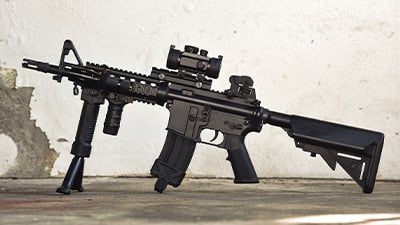 The Modern Warfare M4A1 is a beast of a gun in Call of Duty. It’s one of those guns that can just shred competition, is fun to use, and is overall a great experience. But! As you may or may not know, the M4A1 can be heavily customized in Modern Warfare. Some of these combinations can be just awful. I’ve seen a few that somehow seem to make the gun worse. But! There are also excellent builds that you can create with your M4A1 that will allow you to devastate other players and dominate in both Warzone and multiplayer. In this article, I’m going to take you through some of the best builds you can have for it.

Now! I want to point this out right away. Some of the best players in the world used these. A few don’t. If these work for you, and they probably will bring you to another level of skill, good! But, don’t be afraid to tweak them to your liking and figure out what, exactly, works for you. At the end of the day, what matters is that you have fun and that you, personally, improve. Ready? Let’s go!

What is the Best Rounded Setup?

Before we get into any of the specialty loadouts, I’m going to keep this basic for you. There’s a time for being fancy, and then there’s a time to have your bread and butter gun, the gun that you can use whenever and be happy with in a whole bunch of scenarios. It’s heavily adaptable, and overall, just a great loadout (even if you might be a little bit less mobile).

Here’s what you need for this: Throw on a Corvus Custom Marksman barrel, Integral Hybrid optic, FMJ perk, 60 Round Mags for ammo, and a Ranger Foregrip for your underbarrel. Boom. Go get ‘em!

Okay. I’m not going to condone you being a camper, but if you are going to be camper with an M4A1, this is the way to do it. Look, I get it. Camping is fun. You get lots of hate, but it’s fun.

Here’s what you are going to need: For your barrel, use the FFS 12.4” Predator, for optics the Thermal Hybrid, for stock the Singuard Arms Invader, for your perk Fully Loaded, and for your underbarrel, just go for the trusty bipod.

Want to play like a pro? Well, you might not be able to, but at least you’ll be able to have a loadout like a pro! I don’t know if you’ve heard of Ian “Crimsix” Porter, but if you haven’t, he’s a phenomenal player. He’s one of the most famous, most successful, and most decorated Call of Duty pro esports players in the world. And fortunately for gamers, he went ahead and revealed his setup. Now, if you use his setup, you can’t complain about the gun being trash because literally one of the best of the best use it.

Here’s what you need: For your barrel, go with the Stock M16 Grenadier, for your optics the Cronen LP945 Mini Reflex, for your stock the Singuard Arms Invader, for your rear grip the Rubberized Grip Tape, and finally for your underbarrel use the Operator Foregrip. All together, you’re going to have a highly deadly loadout. Now! It is worth mentioning that what you are losing here is some mobility. That’s the bad news. The good news is that if you actually hit your shots, especially from long range (which is where this build excels), you can demolish your opposition.

Let’s say your thing isn’t faraway accuracy and you aren’t huge into camping or slow play. Maybe you’re one of those gamers that goes for it all, lives on the edge. You’re one of those who uses a run ‘n gun setup. You’re sprinting around, you’re going crazy, you’re one second from greatness or death. If that’s you, you and I both know that some guns are better than others for that loadout. Fortunately, yes, the M4A1 in Modern Warfare is actually dang good at this play style! Now, I’d recommend a few alterations, but that’s what I’m here for.

Here’s what you need: For your laser, use the 5mW Laser, for your optics the G.I. Mini Reflex, don’t use a stock, for your rear grip use Stippled Grip Tape, and for your underbarrel, use your Merc Foregrip.

Okay gang, that’s all I have for you today. The Modern Warfare M4A1 is a serious gun that can pretty much show up and demolish anywhere. It’s just really, really good. Now, I want to point this out for you right now: these are excellent loadouts, but they might not work for you. You might have a slight variation or hate all of these. That’s okay. Find your best ones, and use these as a starting point. They might be absolutely perfect!