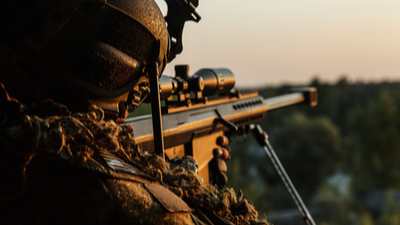 Call of Duty: Modern Warfare. Fun game, right? Enjoyable, slick controls, solid graphics, blah blah blah. It’s a great game overall! It’s popular for a reason. But here’s the thing, my reader friend: the best part of it is dominating your opponents! I’m not talking about merely getting by, I’m not talking about getting a 1 to 1 K/D, I’m talking about destroying the enemy.

What Kind of Play Style does the Modern Warfare Rytec AMR Work For?

All play styles work with the Modern Warfare Rytec AMR. You can absolutely use any play style with it, but because it is a sniper rifle, some play styles are more suited to it. Snipers were meant to sit in a stationary spot and camp, so that’s where this will be strongest according to logic. However, according to highly gifted players, this can also destroy in any play style, including Run ‘n Gun. A lot of it is practice. Since it inflicts so much damage so quickly, if you are accurate, this is a terrific gun to have as a primary loadout regardless of your play style.

Having mentioned that all play styles work with Modern Warfare’s Rytec AMR, it’s only right of us to provide you with the setups for those styles, right? Here ya go.

The Rytec AMR is made for stealth, so this is the most obvious loadout. If you want to be the sneaky ninja troll of the battlefield, here’s what you should try: for your Perk, use Presence of Mind. If you aren’t familiar, it’ll let you have more time to hold your breath and take the best shot. Muzzle: Rytec AMR Suppressor. This is the sneaky bit. For your Barrel, use the FTAC 448mm Dictator, for your Stock, you can’t go wrong with the FTAC Trekker, and with your Rear Grip, use the Granulated Grip Tape.

As far as Perks, there is some debate on this. However, from personal experience, I would say that the Cold-Blooded Perk and the Ghost Perk is absolutely vital. The Amped Perk and the Tracker Perk are also good, so I’d try out the combination and see what works for you the best.

The Rytec AMR is somewhat crippled through too many modifications of the wrong variety. This thing is absolutely a beast of a gun, and though it is loud, it can churn out whopping damage. If you don’t care whatsoever about being heard and all you want is to pump out pain like the agent of chaos that you are, this is the setup to use. We are going to be using the semi-auto feature of this rifle to shoot fear (ha, pun!) into your enemies one bullet at a time. For your Perk, use Sleight of Hand. For your Barrel, use the XRK Harbinger. For your Optic: the VLK 3.0x Optic. For your Stock, the STOVL Tac-Wrap. Finally, wrap the whole thing up with your Rear Grip: Stippled Grip Tape.

As far as Perks, I’d recommend EOD, Battle Hardened, and Pointman. I am, however, tempted to say that the Perks don’t matter as much as personal preference, but this come highly recommended by many people, so I’d give these the chance they deserve first.

Super mega honesty time. There is nothing, and I mean nothing, more satisfying than seeing a tiny little enemy halfway across the map, lining up a shot, predicting, and popping ‘em with a good, clean headshot. That’s probably the best part of the whole game, because they have absolutely no idea what happened.

They were going about their duties, fighting people, having a grand old time, and then without any warning whatsoever, they have to respawn. It is also the most frustrating way to get killed, because you can’t keep it from happening! Here’s what you need: for your Perk, try Fully Loaded. For your Barrel, try the FTAC Seven Straight. For your Optic, try the Variable Zoom Scope for all your pesky opposition, near and far. For your Stock, I’d try the XRK Mastadon, which is also a really cool name. Finally, wrap it up with the Rubberized Grip Tape.

For your Perks, use Double Time, High Alert, and Shrapnel. In my experience, the biggest ones here are Double Time and High Alert. Shrapnel is fun, but it isn’t crucial like the other two.

Well gang, here we are—we made it through to the end of the article! There are lots and lots and lots of different setups for this awesome gun, but here are a few great ones to start you off with. They’re good enough to use and grow and practice on, but understandable enough and easy enough that a complete beginner can start using them right now.