Genshin Impact How Xingqiu Got His Vision 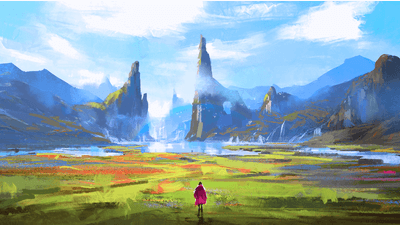 The Guhua Clan’s martial arts have three schools, Light Piercer (polearms), Rain Cutter (swords), and Life Ender (both) in Genshin Impact. However, in the intervening years, the clan waned, and these arts turned into diamonds in the rough. They needed a worthy successor to revitalize the art.

They found it in Xingqiu, whose intuition and knowledge helped realize the martial art schools’ principles. The realization made him pen some verses. When the Guhua Head read those words, he passionately cried out, “It was not Xingqiu who needed the Guhua Clan, but the Guhua Clan that needed Xingqiu!”. While not explicitly mentioned in the story, this was likely the moment that earned him his Vision.

The scroll was sealed, despite needing to be read by every practitioner. It wasn’t that it was too precious, but the handwriting was atrocious.

The ambitions of Hydro Vision users stem from protecting something or someone. Barbara wanted to cheer up and heal a sick child. Ayato, as head of the clan, aims to protect his family. Kokomi’s primary concern is her people, and Yelan keeps the peace of Liyue. We might not know about Tartaglia’s ambition, but it should be along those lines. Consider that he wants to preserve the innocence of his younger siblings.

Xingqiu’s code of chivalry can extend to protecting other people. He’s not one to turn a blind eye to someone who needs help if he is capable of offering it. What that has to do with Justice isn’t really clear. The gods of Celestia seem to be using different criteria for granting specific Visions, one that doesn’t necessarily rely on the Archon’s ideal.