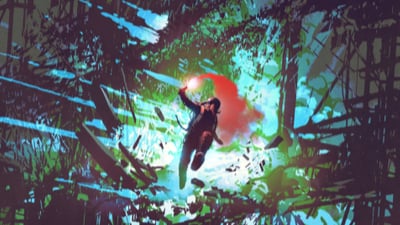 Fortnite Chapter 2: Season 4 is now live, and it is certainly looking like the best season this Chapter. We have one of the best Battle Passes ever, the coolest Mythics Fortnite has ever had, a great new loot pool, and many exciting things coming up in this three-month-long season.

With a 21 GB update (on PC) and plenty of new cosmetics, weapons, and map changes, this season is looking incredible already. In this article we’ll be taking you through all these changes, levelling tips, and a sneak peak into future content through some leaked information.

Season 4 is the first ever Fortnite season to be a 100% crossover, with each skin representing a unique and popular Marvel character. The Season 4 battle pass costs 950 V-bucks and includes: Thor, She-Hulk, Groot, Storm, Mistique, Dr. Doom, and Iron Man himself. The skins are based on these characters’ comic-book counterparts, and each come with their own in-built emote that is locked to that skin. There are some nice little details to this battle pass, such as Mjölnir (Thor’s hammer) only being usable by the Thor and Captain America skins, as per the lore.

Along with this set, several other skins have been leaked or hinted by Epic Games:

The above skins will most likely be Item Shop skins, purchasable for V-bucks. Hopefully, Captain America will be back in the Item Shop for those who missed it the first time around.

While the map hasn’t drastically changed like some of the previous seasons such as Chapter 1, Season 5, there’s certainly a lot going on. There are giant sentinel robots lying to the west of Lazy Lake, with their hands having in-built bouncers.

Dr. Doom has taken over Pleasant Park, with his own castle-home in it with prison cells in the basement. There’s also a vault under the soccer field – yep, there’s an underground area in Pleasant Park now. Authority is undergoing major changes, looking like its “residents” are moving elsewhere. The surrounding wall is just a foundation at this point, and it’s pretty certain that by the end of the season, the Authority will have transformed into an Avengers-themed building. Strangely, the Henchmen at the Authority have turned almost friendly, and don’t attack unless provoked. It’s certainly nice to go around the giant building without being shot at by ten NPCs!

Crackshot’s Cabin has been replaced by a farmhouse, where Tony Stark is building something. There’s a new building in Retail Row – the officer of She-Hulk, Jennifer Walters. The dynamic building in Retail Row is also undergoing changes, and the Shadow signs have been wrapped up. Camp Cod (the island in the bottom right of the map) has returned to how it was before the flood, and there’s a strange building with vases and urns. Wolverine has left claw marks around Weeping Woods as well.

You can also see Galactus approaching the Fortnite island high up in the sky, hinting towards what will certainly be a grand live event. We didn’t have one the last season, and everything in Season 4 is pointing towards a giant Avengers vs Galactus faceoff.

The Marauders have been replaced by Stark Robots. Four jets land in random locations around the island, marked by a white plane icon on the map. These locations contain the Stark Robots, the jets, some loot, and flying Loot Carriers from Season X. The Stark Robots each carry one Stark Industry Assault Rifle, which is similar to the Infantry Rifle from previous seasons. The great thing about these Stark Robots is that after knocking them out, you can hack them to make them a part of your team. The follow you around, emote with you, and fight for your team.

A bunch of old items were unvaulted this season: Tactical SMG, Combat Shotgun, Port-a-Fort, Bounce Pads, Shockwave Grenades, Bandage Bazookas, Silenced SMGs, Scoped Assault Rifles, and Pump Shotguns. While these changes have been pretty well-received by the community due to a more diverse loot pool, the vaulted items have been disappointing. Tactical Shotguns, Flare Guns, and Launch Pads – three of the most useful items from the previous seasons, are gone. The new item this season is a trap, called the Flame Grill Trap, similar to the one in Save the World.

The new Mythics this season are: Silver Surfer Board, Groot’s Bramble Shield, and Doctor Doom’s Mystical Bomb. Doctor Doom is honestly the toughest NPC in Fortnite yet. There is a “Kill Doctor Doom x 3” challenge in Week 1 that is difficult to complete due to Dr. Doom being so powerful and surrounded by Henchmen. Moreover, he has a 50-50 chance of spawning in the house and below the soccer field. Pleasant Park is extremely active right now, with dozens of players landing on the Dr. Doom house hoping to get a kill. His Mythics are devastating to say the least, with the ability to set entire houses on fire within a second. I definitely sense incoming nerfs, either to Dr. Doom, his Mythics, or the challenge.

That is it for the Season updates! The battle pass has 100 tiers as usual, and if you wish to go further and unlock all the “foil” styles, you can grind up to level 220 for the same. Punch Cards are still there, we have 5x 10k XP challenges per day, and Weekly Challenges are following the same format as usual. The cosmetics this season – including the emotes and the innovative gliders – are definitely worth grinding for. We hope our Fortnite Season 4 guide helped you get a quick overview of the new changes. See you on the Battle Bus!