Fortnite Chapter 2 Season 7 Leaks: Everything We Know so Far 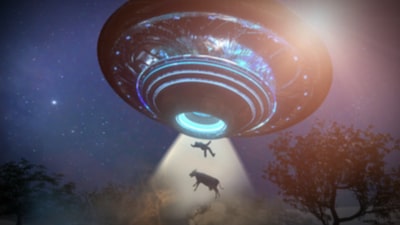 Today, we’ll be taking you through everything you need to know about Fortnite Season 7 so far: leaks, hints, and even encrypted messages in secret phone calls.

The Spire Symbols and Alien Warnings

Fortnite rarely starts marketing for the next season this early, but two weeks ago, a number of content creators received teasers in their mailboxes. These teasers had cryptic numbers, codes, and strange symbols on them, some of which we found on the Fortnite island itself. Apparently, they are related to the symbols of the Spire. Each of these teasers also had the words “They’re coming” written on them. Soon enough, we also had new posters on the Fortnite map. These posters had humans and aliens gathered around the planet holding hands in harmony.

Some content creators like SypherPK, Ali-A, and Loserfruit then got DVD players mailed to them with footage of strange real-life desert-like places with symbols imprinted on them, like crop circles. When they asked Epic if they had sent it, Epic replied that they hadn’t (which is obviously not true). Now going back to the teaser posters, people quickly figured out that the numbers on them were actually phone numbers. If you called them, you could hear creepy, alien voices and the recordings also changed every day. Also, alien abductions have officially started in-game, and there is a 60% chance that they will appear at the end of a circle, abduct a player (or team), transport them elsewhere on the map, and restore their Health and Shields.

Remember back in Season 3, when we saw the meteor in the sky and you could hear a low humming noise if you aimed at it? Just like people put that into a spectrogram (a visual way of representing sound), these alien sounds were also put through a spectrogram and we found our first real look into Season 7.

Now there were a number of different images, each derived through a different call. You had Peely running from a UFO, a few more strange symbols, a kangaroo, and different phases of the moon. Note that kangaroos were recently referenced by another NPC in one of their dialogues. According to data-miners, kangaroos, octopus, and platypus are going to be the three different types of wildlife next season. Now we might get extraterrestrial creatures resembling these animals, and Epic might just be hinting at that through these teasers.

We’ve got information about two crossover skins and one core Fortnite skin for the next season. The first crossover skin is Loki from the MCU. If you’re a part of the Crew, a recent loading screen revealed his silhouette in the background.

The recent Batman x Zero Point Issue #3 revealed the second crossover skin to us: Samus Aran from the Metroid series. Samus was not only seen as a silhouette in the comic, but also mentioned in the Apple vs Epic files. This was previously planned to be a crossover in one of the previous seasons, and will likely be a Nintendo-exclusive Fortnite skin.

The third skin and the only original Fortnite skin that we know of yet is the alien version of Fishstick, revealed through leaked files. It’s great to see another Fishstick variant, but hopefully we also get The Foundation as a Tier 1 skin, just like we got Agent Jonesy.

The symbols from the desert in the DVD can be matched with the different Spire locations on the map, and it’s pretty likely that the entire middle of the map will be changed in Season 7. Hopefully Epic makes changes in the outer POIs too, because locations like Coral Castle and Steamy Stacks definitely need some changes.

Colossal Crops is slowly being altered, and all the crops have been taken off the farms and replaced with huge crop circles. These also match all of the Spire locations on the map. There’s a good chance that just like the character Raz, the aliens are also attracted to the power of the Spire.

A new set of challenges were released this week called “Foreshadowing Quests”, and these are giving us a lot of possible lore info regarding Season 7. For starters, there’s a black helicopter that has crash-landed on our island. It has the IO symbols on it and you can read audio through it that talks a lot of cryptic stuff that no one has been able to decode yet.

Bunker Jonesy then asks us to look for “CB Radios” all around the map, introducing us to a brand new character called “Mari”. Like older seasons, we also have warnings of the impending danger on TV sets, which is a pretty cool throwback to Chapter 1, Season 3.

The radio messages talk a lot about aliens, and Mari mentions Dr. Slone in a cautious tone. Dr. Slone is Jonesy’s senior from the IO and possibly the leader of the organization. Jonesy had directly defied her orders before going rogue and she probably wants to arrest him before he reveals too much information about the IO to anyone within the Loop. Poor Mari is later taken captive, possibly by the IO guards. Man, this is not the kind of organization that would look good on your resume.

Fortnite Chapter 2 Season 7 officially releases on the 8th of June, and it has been confirmed via leaks that there will be no live event leading up to it. We might have an in-game experience like Season 6, but it wasn’t that disappointing for anyone, considering how hyped up this season’s looking to be.