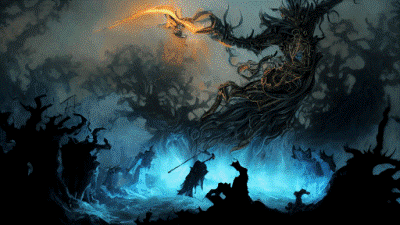 Despite the Traveler’s best efforts, the sages’ manufactured god came to fruition in Genshin Impact. However, with the Dendro Archon’s help, they could keep the damages to a minimum. The Everlasting Lord of Arcane Wisdom (also called ‘Shouki no Kami, the Prodigal’) is the seventh weekly boss in the game. Its battle can be challenging even if you read through the game’s tips and tutorials, so we’ll explain the fight mechanics in more detail.

Shouki no Kami has two phases: one where his torso is vulnerable and the second with his legs connected. Nahida gives you the Neo Akasha Terminal (NAT) to help with both phases. It’s a handy companion that can paralyze the boss after specific actions.

You can directly attack Shouki no Kami’s torso in this phase to move on to the next. Of course, he won’t just sit there and take your attacks. He’ll use different moves to protect himself, which you’ll need to avoid so you can continue attacking him. The boss will take these actions (attack names are taken from the game’s wiki):

Voice line: At my command, you shall fall!

Every time one of his attack ends, it’ll leave behind Energy Crystals that can charge up the Neo Akasha Terminal. You might’ve noticed some symbols on the battlefield in front of the boss. Those are elemental matrices where you can discharge the NAT, creating beneficial effects for you and your allies. Stand on their areas and activate the device (default LCtrl) to use them.

There are six of them, three on either side. On the left are Pyro, Anemo, and Electro. The other side has Cyro, Hydro, and Electro. Here are their effects:

In Phase 2, Shouki No Kami will connect to his legs, making him more mobile and opening up the battlefield. He’ll have different attacks in this battle portion:

Otherwise, if you fail to stun him within 40 seconds, you’ll get hit with the Setsuna Shoumetsu, a definite one-hit KO for all active characters. The attack will ignore shields and defensive stats.

In this phase, the Energy Crystals for the NAT will have Four-Leaf Sigils, making collecting them easy. The device will also start continuously shooting at Shouki no Kami, chipping away at his shield or health. It can fire a ‘charged’ projectile when charged, dealing increased damage. You can aim it by pressing E after activating it with LCtrl.

The game gives no recommendations for elements to bring. However, you should have at least one Dendro, Pyro, or Cryo character. They can quickly destroy the Nirvana Engines when Shouki no Kami charges up Setsuna Shoumetsu. Electro and Hydro do not affect the objects, though you can still bring them if they’re a strong DPS or support character.

For Nahida havers, only her charged attacks hit the flying engines. Either of the current Dendro archers is a better choice.

I’d also recommend DPS archers, so you don’t have to go close to damage him. Ganyu and Yoimiya are excellent options if you can take advantage of his vulnerable states. The mentioned Dendro archers are passable, too, Tighnari more so than Collei.

Mobility is another consideration. Though you’ll manage with any character if you know what you’re doing, some could have extra utility. Venti can save your NAT charge by using his held E to create an air current in phase 1. Kazuha can technically do the same, but Venti’s ability can keep characters aloft for longer. Yelan’s E can also get you to reposition faster. Sayu’s not as recommended unless you can maneuver her well.

Healers with an aura (Barbara, Qiqi, Kuki) can also save NAT charges. They can substitute for the Hydro matrix. You’ll want to be mobile, so you can’t stay in a healing circle for long, making them the superior option. As for shields, remember that those don’t help with the Setsuna Shoumetsu. Otherwise, they can replace healing if they’re strong enough.

Listen to What He’s Saying

He’ll announce his attacks by shouting phrases beforehand. Use them as a warning to take the appropriate actions. The voice lines are listed in the respective moves.

Paralyzing Shouki no Kami in Phase 1

When you’ve activated both Electro matrices, they’ll be inert until you use 2 other ones first. You can’t stun him immediately after he gets up from being vulnerable. Besides, your NAT would be discharged at that point, so it is impossible to do anyway.

Co-op mode could be a blessing or a curse. In phase 1, it could be helpful since you could activate multiple matrices as needed. Stunning him is also more straightforward because you don’t have to activate the matrix, run to charge up, and activate the other. You can have a friend stand on the other emblem and start both simultaneously.

Two players are more manageable. Still, both require the above knowledge to make everything go smoothly.

As for solo fights, it’s easier. You have 3 other ‘extra lives,’ and you can resurrect them with the NRE device. Once you figure out what to do, the fight becomes simple, and you can finish it quickly. It’s up to your preference to fight this boss solo or co-op.

Missing your fully-charged shot with the NAT in phase 2 returns the charge to the device, so you can try again. Don’t feel too pressured to hit Shouki no Kami. The boss stands still at the most critical moment you need to do it. Relax, and don’t worry about missing.

Make Use of the Energy Crystals’ Four-Leaf Sigils

In the second phase, Energy Crystals have these handy sigils so you can get to them faster. With some strategy, you can use them to get around and avoid some of the attacks coming your way.

Directly attacking Shouki no Kami in the second phase is possible and will slightly help the NAT deplete his shield faster. Still, it’s better to use the charged NAT shots.

The Summary, If You Thought It Was TL;DR

You can get two achievements during this fight:

Now that you know how his boss battle works, it’s time to implement it. Hopefully, it helps you beat the boss faster and with fewer casualties. You’ll be farming this boss for the more recent characters, so you’ll need this guide. One of them is even a playable version of this boss, so if you want the Wanderer, you can pre-farm material with this information.