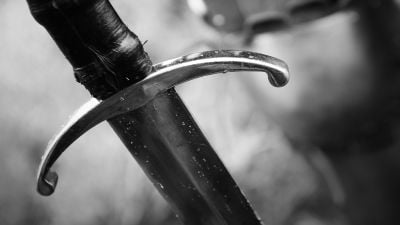 Weapons are a vital part of combat in any video game and OSRS is no different. When RuneScape decided to activate the Evolution of Combat update, people noticed the striking contrast between how it works in both OSRS and RS3. In this OSRS and RuneScape Weapons preview, we will help make it easier to understand the way weaponry works in each version.

Is there a difference between weapons in Runescape 3 and OSRS?

The overwhelming amount of content in RS3 notwithstanding, Jagex had completely changed the way the original weapons worked. Some weapons were made useless while some under-powered ones were renewed. There was a lot of division in the community with this update, but it did offer new dynamics to an aging game.

The most critical change was the ability to dual-wield 1-handed weapons in the form of an off-hand version of said weapons—an example of this being a rune sword and an off-hand rune sword. Typically, OSRS had only allowed players to equip a weapon and shield or a two-handed weapon, with nothing else in-between.

As one would expect in a Medieval-style game, there is a lot of content surrounding swords in Runescape and OSRS. This includes the likes of short swords, long swords, scimitars, 2-handed swords, and rapiers.

The Dragon Scimitar is one of the more popular swords, especially for pure strength training or mid-level players. The Dragon Longsword used to be held in high esteem up until the scimitar’s release.

God Swords made their way into the game and are by far the most useful 2-handed swords in both RS3 and OSRS. More than anything, the special attacks make them more of a utility weapon rather than a primary weapon, especially for PvM in OSRS.

Sadly, daggers aren’t held in particularly high esteem in any version of Runescape. In OSRS, the dragon daggers are typically just used for special attacks that land double-hits. The Abyssal Dagger is a powerful and viable weapon, but it is topped by several other options.

In Runescape 3, there are also off-hand versions of daggers which may resemble defenders from OSRS. Unfortunately, they are beaten by swords with more power and the same attack speed.

Maces have a unique mechanic of adding a prayer bonus on top of its offensive stats. Unfortunately, they are quite mediocre in terms of DPS, attack speed, or special attacks (in the case of a Dragon mace). Some people may use them for the novelty of things, but the fact is there are better crush weapons to be used.

The ancient mace is somewhat of a useful item in both OSRS and RS3, but it isn’t for its damage. It’s a rather weak weapon but the special attacks allow you to leech prayer points from the enemy. You are even able to leech enough points to go beyond your maximum level.

The Abyssal bludgeon is the only end-game weapon that can be lumped together with maces and other blunt weaponry. It is by far the best crush weapon in the game and can smash through Gargoyles, among other things. The downside is that it is extremely expensive compared to other weapons, like the whip or Saradomin Sword.

There are also various mauls in the game with niche uses, such as the Obsidian Maul and Granite Maul. The Granite Maul is particularly liked by PKers because of the quick special attack it has when switching from another weapon.

In OSRS, spears and halberds are two-handed weapons in the game that are typically slow but powerful. In terms of end-game content, Zamorakian Spears and Crystal Halberds are best used for certain bosses.

Hastas are converted from spears into one-handed weapons. The Zamorakian Hasta is regularly used as a stabbing weapon for bosses and training, along with a defender or shield.

Staves are typically reserved for Magic attacks, although they can be used for melee as well. The only staff worth using for combat is the Staff of the Dead (and it’s Toxic version), which is comparable to an Abyssal Whip.

In OSRS, staves add a significant magic accuracy bonus with the ability to auto-cast spells. Elemental staves also save the player from expending runes, saving both money and inventory space. Wands also exist, but are functionally the same as staves.

Auto casting spells are possible in Runescape 3 without the need for a staff or wand. The Polypore Staff is considered the end-game when it comes to staves and is needed to cast Polypore Strike. Otherwise, elemental staves function similarly as they do in OSRS.

Other weapons don’t fall into the linear classes but are still important. One of them being the Abyssal Whip dropped from Abyssal Demons, which is an end-game reward for achieving a high level in slayers.

Dragon Claws is also an outsider item, which is the most overpowered special attack for PvP. It allows for four consecutive hits, stacking out damage quicker than players can realistically eat. In Runescape 3, this game from Tormented demons, while it’s a chest reward from Raids 1 in OSRS.

OSRS is dominated by short bows and high-level crossbows. Longbows that exist in the game are mostly ignored due to the slow attack speed. Rune crossbows and higher dominate a large portion of end-game content due to enchanted bolts and their various effects, like armor-piercing or percentage-based hitpoint reduction.

The Twisted Bow was an over-powered item added to the game, allowing players to melt through most bosses and high-defense monsters in the game. This bow is a very rare drop from Raids 1, and its price tag matches it.

In Runescape 3, longbows were converted into shield bows in an attempt to revive them but are set aside for other types of ranged weapons. Weapons like the Seren god bow, Noxious longbow, or Zaryte bow.

Off-hand pistol-style crossbows are also a new addition to Runescape. This makes dual-wielding Ascension Crossbows or Chaotic Crossbows deadly combinations. Throwing weapons are also prevalent, but str usually reserved for training due to their low strength. You may also see 1 Defence pure using them for player killing.

As you may have noticed, there isn’t much complexity to Runescape and OSRS weapons compared to other games. It’s important to note that many weapons have certain level requirements and only a few are locked behind quests or minigames.