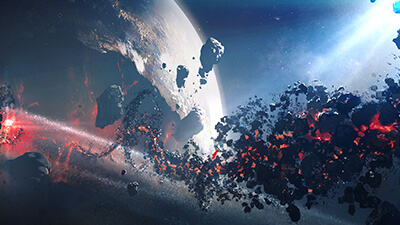 If you’ve passed through the Warframe storyline you must have encountered the name Kuva Lich a number of times by now. You’ll even see it mentioned all the time in Global Chat when players are recruiting teams for farming them for rewards. But what are Kuva Liches?

In Warframe, a Kuva Lich is a type of enemy, and each one has their own unique name and a few randomized properties. Kuva Liches are part of the Grineer faction and have been spiked by the Queen’s Kuva, and despise the Tenno that has caused them to become what they are. They steal loot from Tenno and have powers that make them immortal in the game. This invincibility can be broken by players by discovering sequences inscribed on “Requiem Mods” that Tenno can discover and enable on their Parazon in the specific order. This purifies the Kuva and disturbs their continuity.

This Warframe Kuva Lich Guide will take you through everything you need to know about the Kuva Lich, where you can find them, and how you can defeat them in order to gain specific rewards.

How do you make a Kuva Lich spawn?

There is a type of enemy called “Kuva Larvling” that can spawn only after you have completed the quest The War Within. Note that these cannot spawn on the planet Uranus, in Quests, Fissures, Dark Sectors, Invasions, Sorties, or in any node in the Void. Kuva Larvling spawns are indicated by flickering yellow lighting in the level you’re in. Similar to how to make a Juggernaut spawn, you can actively make the Kuva Larvling spawn from here. There is a time limit in which you have to kill a number of enemies that’ll cause the Larvling to spawn, indicated by a red market on the map. A Kuva Guardian transmission will also announce its presence on your screen.

How do you eliminate the Kuva Lich?

Killing the Kuva Larvling using a Mercy kill will cause a Kuva Lich to spawn and only the last player in the squad that damaged the Larvling will be eligible for the Mercy kill. Note that trying to Mercy kill will put you at a lower risk than your Sentinel or Pet for that time period. Any enemies will target them before they target you. While this is an advantage in a way, it can also cause your poor Sentinel or Pet to die first.

Failing to Mercy kill will cause the Larvling to despawn within a timer of 30 seconds and you can continue the rest of the mission as intended. The outcome of the mission also does not affect the next steps even if you do kill the Larvling. Exit the mission to obtain 100 Kuva and return to your Orbiter to receive your message from the Kuva Lich.

Kuva Lich can also be obtained via trading from another player. All Kuva Liches can be traded if the player decides to convert it instead of eliminating it. Every Requiem Mod has three charges on it, and using the mod to kill a Kuva Lich will use up a charge. Using up all three charges will mark the mod as “Defiled”. Four Defiled Requiem mods can be transmuted into a new, randomized Requiem mod. They can also be sold for 25k credits each.

What kind of rewards can you get?

When a Tenno is within the Mercy distance, you will be able to see the name of the Kuva Weapon and the icon alongside with it that will indicate what the resultant Kuva Lich will possess. The Warframe that created the Lich will determine the kind of elemental bonus damage that the weapon will have, and the ability kit the Kuva Lich will have. This Warframe will be termed as the “Progenitor Warframe”. The weapon you’ll see is randomized and players can farm the Larvling several times before they Mercy kill one with their chosen weapon.

Here is the weapon list for the Kuva Lich:

Make sure you acquire all eight available Requiem mods and equip three of them on your Parazon in the correct sequence. You can farm these mods or obtain them by trading with another Tenno. If you try to take down the Kuva Lich with your Parazon but have the incorrect combination of Requiem mods, you will only receive a part of the Kuva reward. Make sure you follow the proper strategy, since failed attempts will rank up the Lich, making it harder to kill on your next attempt. Failing will also rank up the enemies around you and make the task even harder.

It is easy to find teams for Kuva Lich farming since a lot of people are doing it. You can find them via Recruitment Chat! Make sure that you choose a mission where the mission node is surrounded by red mist and the name of the mission matches the name of your Kuva Lich. You’ll find these missions around level 55-70 and can go as high as level 100. If you’re unable to find a team, just set the mission to Public and jump in. Following the tips in our Warframe Kuva Lich guide will surely get you through. Happy farming!