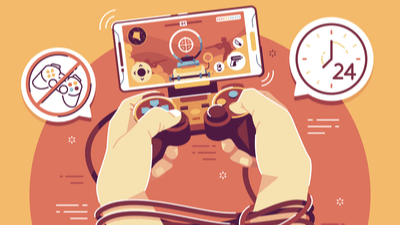 (Content Warnings for alcohol and drug use is compared to gaming. Brief mention of suicide.)

Games suck their players in a world of fantasy and offer an escape from their current reality. Depending on the game, it can be a world filled with magic and wonder or the complete opposite. They’re designed to be played and enjoyed, so developers have used certain psychological principles to keep players engaged. However, it can have a negative effect, such as gaming addiction.

The problem is when players latch on onto games in an unhealthy way. They spend hours in front of the screen, neglecting other physical bodily needs such as eating or drinking water. Problems with posture and other physical ailments would also come with these long gaming sessions. Then there’s also some eye problems from looking at a screen for all those hours.

While gaming addiction as an issue isn’t as talked about a handful of years ago, it’s still an ongoing problem. It’s even more important now, during the pandemic. Kids have lost the opportunity to play outside. Parents are working at home, and schooling is done virtually as well. While their parents work and they’re done with schoolwork, what are they to do? What can they do?

The Sociability of Humans

We’re not meant to be alone. Humans are social creatures. That’s why isolation room occupants tend to go crazy after some time in their stay in one. We crave the connection with other people, to give, take, or share experiences with.

Think about it, social media usage has only spiked during the pandemic. It’s funny that the widespread policy of the pandemic is ‘social distancing’ when they meant ‘physical distancing’. The former implies isolation and not connecting with other people. For example, feeling lonely even when you’re in a crowd. You can be sticking together like sardines, but you don’t talk to each other. Another example is sitting with a friend but feeling miles away from them. That’s social distancing.

The pandemic doesn’t let people get close to each other physically (because the virus might spread), but they can still talk to each other. It would have to be done virtually, through calls (video and audio) or messaging.

When a person gets ignored, they start to think they’re not important. Then, they start expecting that of all people. It gets past a certain point; they think they don’t matter to anyone at all and just end it all.

What does this have to do with gaming addiction?

The Connectivity of Gaming

Gaming connects people. It’s most evident in MMOs, where players can chat with each other through voice and text. Otherwise, it’s in forums or chat groups where people can talk about a certain video game, ask for help, or provide aid to others.

Even NPCs will acknowledge the player character in single-player games. It can be a little one-sided, but people take what they can. Then they save the world or rescue the princess, and everybody cheers for the player character, and by extension, them.

This fulfills the social needs of a person. When they can’t get it from their family or friends, they get it through gaming. Since gaming is their only source of social interaction, it doesn’t sound as far-fetched to see them sitting in front of the screen for long periods.

Slowly, they start neglecting health because it’s their only source of pleasure. A pleasure that, unfortunately, has diminishing returns.

The thing about drugs and alcohol is the increased tolerance of the substances. The user would need more bottles, more doses, just to keep getting a consistent high. Soon it wouldn’t be sustainable, and everything collapses.

While those affect the body directly (one lowers inhibitions, the other stimulates the brain), games stimulate the brain from outside the body. The principle is the same, though, just exchange bottles and doses with challenges. Puzzle games are pretty straightforward, the player would need harder and harder puzzles to solve. In a PvP-based one, they’d want to challenge better and better players.

There’s also the gambling aspect in some of the games. This one can add to the addiction factors but runs on a different principle. Most of the details are here [link to gacha gaming]. The short version is, the chance of winning a jackpot is an alluring thing, and pushes players to keep on going until they get it. Luck and RNG can be rather stingy though, and it might never come, but the chance is always there, and as long as it’s not impossible, they’ll always keep trying.

The two factors are social fulfillment and a mistaken assumption of how luck and chance work. Both factors have a common thread of getting pleasure and a positive feedback loop. Addicts latch on to them because they think it’s the only source of happiness.

Why would they stop playing when reality hurts? When they’re just ignored in the real world, they’d rather spend time with those who appreciate them, never mind that said people are virtual ones.

The best way to avoid gaming addiction is to give the child or teen other types of hobbies. Let them learn an instrument or create art. Also, give them a social environment where healthy social interactions can be done, even when just inside the home. Listen to the child when they speak, and don’t belittle or ignore what they say.

Setting a limit on playtime can also help. Nintendo has some systems that help with this, though some people don’t use it as they should. Sometimes the kid gets around it somehow and goes beyond the limit.

It can be hard for other parents who have to focus on work. However, just spending a few hours of quality time with them should help, after or before work. The reality might be a little different, but these should keep the hours down from sitting in front of the screen.

For those living alone, setting a regular alarm to stand up, drink some water, or relieve yourself can help. Further, set alarms for sleeping and waking up. Follow the alarms, and don’t just snooze them. Having online friends check up on you will also help and remind you. The other tips can also help, which is finding another activity/hobby to replace gaming time.

If it has already started, addiction is harder to manage. Gradually cutting down on the time they can play will help, and then give them a different activity to replace gaming. Cutting the time suddenly will meet with resistance with the addict, leaving them resistant to changing their ways. A gradual change is a bit more palatable and will meet fewer chances of resistance.

Well, no plan meets the enemy intact, so these things are easier to say than do. At first, it might not seem to be working, but given time, it can help curb the addiction to a manageable level. It would be hard. Like those who want to quit drugs, they can have withdrawal symptoms. That’s part of progress and can be managed with proper techniques.

Gaming addiction is a problem, but one that can be properly curbed and managed. Make sure that limits will be strictly enforced, as any leniency in the schedule can make the addiction rear its head again. Other factors unmentioned may also be at play, but these are the most important ones.

There was a study done on rats and drug addiction. Isolated rats (alone in the cage) will 100% become addicted to the drug placed in their cages. However, once another rat is introduced, that percentage drops, and with a thriving social life, the rat doesn’t use the drugs at all.

It’s not 100% analogous to human experience, as sociability might be the trigger to drug and substance abuse. That’s why there was a qualifier with healthy social interactions, one that doesn’t include bullying or peer pressure to drink or do drugs.

Still, in these pandemic times, games are sometimes the only link to their friends. It wouldn’t do for them to be disconnected from their peers too much. There should be a balance, and it can be hard to achieve but worthwhile.

Addiction is an ongoing state, and it’ll have ebbs and flows. There will be times that it’s hard to keep limiting the time to play, and other times it’s a breeze. That’s normal, and it’s okay to ask for help when you need it. Nobody can get through life alone, and even hermits get their food and supplies from someone.