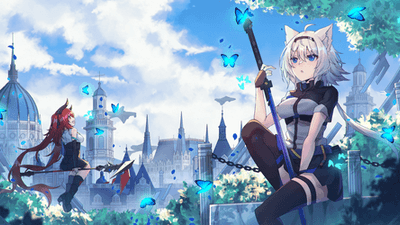 Kokomi makes use of her HP to boost her attacks and healing. She also loses her ability to deal Critical Hits but as a result her healing effectiveness increases. Still, she deals good enough damage to be a DPS and can even heal to boot.

Her Elemental Skill, Kurage’s Oath, summons a Bake-Kurage that simultaneously heals allies and attacks enemies. The jellyfish applies the Wet status to enemies (and Kokomi) as well. As I mentioned earlier, healing is based on Kokomi’s HP. Take note that it won’t move from the spot it was summoned in, and allies must be within a certain range from it to be healed.

Her Burst, Nereid’s Ascension, grants a burst of Hydro DMG as she dons her ceremonial garments. While in this state, Kokomi gets increased resistance to interruption, and her Normal and Charged attacks heal allies. She also gets a Normal and Charged Attack DMG bonus based on her HP, and bonus healing based on her Healing Effectiveness. This also lets her walk on the surface of bodies of water. The state lasts for 10 seconds.

With her passive ability removing her chances of getting a Critical Hit, it’s better to build her HP, Healing Effectiveness, and ATK. Energy Recharge and Elemental Mastery can be good sub-stats as well. You won’t need to build her Critical Hit or DMG Bonus. It’ll be immensely difficult to build more than 100% Critical Hit Chance, which is required to give her a chance to deal a Critical Hit.

The best weapon for her would be the Everlasting Moonglow. Other alternatives would be Prototype Amber and the Thrilling Tales of Dragon Slayers catalysts. For Artifacts, Maiden’s Beloved, Noblesse Oblige, and the Tenacity of the Millileth sets will be good for a supportive Kokomi. For DPS, go with the Heart of Depth either as a 4-set or half with the Milileth set.

For artifact stats, HP is the main stat you’ll want to build. Depending on how you want to use her, you can have Healing Effectiveness on the hat, Hydro DMG Bonus on the goblet, or Energy Recharge on the Timepiece. Whether you’ll use her as a healer, a DPS, or a hybrid of both, make sure you get the right stats for the purpose.

The inhabitants of Watatsumi Island used to live underwater. Their protective deity was the serpent Orobaxi whose remains are in Yashiori Island when the Raiden Shogun slew it. Its resentment gave way to the Tatarigami that plagued the island’s inhabitants. However, it didn’t reduce the god’s conviction to protect his people. This divine will remains in the Sangonomiya Clan, and it passes through the bloodline so long as there’s an heir. This heir is called the Divine Priestess.

The current one is Sangonomiya Kokomi. When she was named the Divine Priestess, all the people of the land went to the ceremony. Everyone considered her too young to ascend to the position and the expressions in the crowd betrayed a deep skepticism.

The ambitious and power-hungry wanted to take advantage of this seemingly young and naive priestess. Yet, they underestimated Kokomi. She was just and fair in issuing punishments and rewards alike. She also had knowledge of military strategy and was empathetic to the needs of the people.

All these qualities made her a likable leader, and the people of Watatsumi Island were won over. Now, everybody is at ease with her at the helm, trusting that all will be well.

When she was younger, she had a voracious appetite for military texts. That’s why she’s knowledgeable about many things and can predict almost anything through her directives. However, all these talents didn’t teach her how to interact and talk to people. It’s why she set up an ‘Energy System’ of self-measurement. It goes up when she does things that she enjoys, and down during things that are unpleasant. You’ll see this in her personal quest.

When she runs out of energy, she’ll hide in a secluded location and read from her favorite military text. She’s can’t be disturbed during this time, though she’ll let her close friends enter this secret place. She is still a homebody even though she must shoulder all the burdens of being a leader.

All her reading lets her predict outcomes on the battlefield. She gives her commanders and generals a list of directives that they can follow in any number of situations. Even if she isn’t present, her soldiers can trust in her directives to keep morale high and give them an advantage. Whether on the battlefield or off of it, she is adaptable in her tactics.

To relax she walks the island alone, avoiding crowds. She savors the forests and beaches, relaxing and observing nature. The sunrise and the sunset, the seashells along the shores, and the stars at night, Kokomi cherishes the island and everything within it.

As a leader of a people who once lived under the sea, Kokomi wants her rule to be like the sea: all-encompassing and holding a whirlpool of souls, ambitions, and visions. It’s not like her to force people to think the way she wants, and she allows her people to reach their ideals in their own way.

Her one wish is to protect Watatsumi Island and its people. To have them live happy and peaceful lives. It was this conviction that presumably granted her Vision, though it isn’t confirmed by the story.

The Hydro element supposedly represents justice. However, new information from this chapter indicates that it is not as black and white as the Archons simply giving Visions only to the worthy. Ei summed it up as the person having ambition and something else intangible. The current working theory is that Celestia sees fit to grant people this favor, though the Archon’s state has something to do with the process as well.

Which element probably relates to what kind of ambition it is. Celestia presumably has a process to decide this, as Archons can change ideals if they’re replaced. Of the original seven, five have been replaced, though one of them technically counts as the same person as the previous. The proof of this is in the pattern of how wielders get their Visions.

Those with the same elements do have things in common, from fiery passion to cold resolve. There is a common thread we can see in the circumstances where they got their Vision. However, Hydro is harder to put down. Four other wielders are here, though one just resonated with a ‘dead’ Vision and another was given a section for their Delusion instead.

At any rate, Kokomi’s section implies that it was a sincere wish that granted them this favor. For Barbara it was to save a child, Mona wanted to study Hydromancy, and Xingqiu wanted to find Justice. It’s not truly about Justice really, which was the ideal of the current Archon.

So many things remain a mystery, though. We’ll only find the answers as the game develops.

That’s all for Sangonomiya Kokomi, Master Strategist and Leader of Watatsumi Island. Her banner is ongoing right now, so don’t miss the opportunity to get her. There are about two weeks left, but that’s going to go by quickly. Here’s to hoping you don’t lose 50/50 and get this tanky healer/DPS.

Let’s all look forward to Genshin’s anniversary and future events!