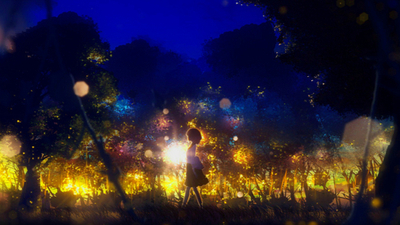 Sara is something like an Electro Bennett, at a lower rate and sans the healing.Her skills can increase an ally’s ATK proportionate to her Base ATK. They do have to be in the skill’s area of effect at that moment it activates, though.

Her E Skill, Tengu Stormcall, gives her the Crowfeather Cover status for 18 seconds. As long as it’s active, Sara’s next fully-charged Aimed Shot will leave behind a Crowfeather at its destination. The Crowfeather will explode into a Tengu Juurai: Ambush after a short time. Ambush will deal AoE Electro DMG, and increase the ATK of the active character in its AoE including co-op allies.

Her Burst, Subjugation: Koukou Sendou, calls down the Tengu Juurai: Titanbreaker, dealing AoE Electro DMG. It then branches out into 4 (6 with the fourth constellation upgrade) smaller AoEs leading outward of the first cast. Ally characters within any of those AoEs get the same ATK increase buff as the Crowfeather’s Ambush.

Now, players have been complaining that she’s clunky and overly complex. However, they probably didn’t notice that Sara only dodges with her E skill if she’s moving. If you release the button or the stick, using the skill won’t make her teleport away from the enemy.

When you’re also setting up her Crowfeather, it’s easier to not aim it too far and don’t use R to aim (for PC users). Hold the attack button to do the Aimed Shot so you can dash right into her Ambush. Her kit also makes it easier to buff co-op allies which makes her a good pick for those kinds of events. Having her Second constellation upgrade also makes it easy to set up the Crowfeather Ambush.

Due to her buff scaling, it’s better to use weapons with a naturally high Base ATK, such as 5-star weapons (especially the Amos Bow). Still, her buffs won’t reach the level of Bennett’s though it’s significant enough as a lesser substitute. Good 4-star alternatives would be the Sacrificial Bow or the Stringless.

As for artifacts, it all depends on what role she’s playing on your team. For a more support-oriented Sara, a 4-set Noblesse Oblige would do the trick. If you want to spam her Burst, the Emblem of Severed Fate set is the best one for that. She can also go hybrid-DPS/support and use 2-set Noblesse and 2-set Gladiator’s Finale. Going full-DPS would mean 2-Gladiator’s and 2-Reminiscence of Shimenawa set, for a total bonus of 36% ATK increase.

Kujou Sara’s not as bad as some players would have you believe. Granted, she can be difficult to use on mobile but PC and PS users shouldn’t have too much trouble. Sure, she doesn’t buff as much as Benny does nor heal allies, but she makes up for it in Energy Recharge. Put her in a team with another Electro user and you should be able to spam all the Bursts you want.

Kujou Sara is the general of the Raiden Shogun’s army and the adopted ward of the Kujou Clan of the Tenryou Commission. She was a Tengu of the forest, found unconscious by the roadside. Due to possessing a Vision by the time she was found, clan head Kujou Takayuki raised her to be a general. He believed that she was a destined child due to the favor granted to her at such a young age.

Takayuki named her Sara, and thus her journey to becoming who she is now started. Like any other child, she loved to play, and she had no one but the soldiers to play with. After seeing her playmates get scolded by the head, she distanced herself from others and trained hard. Bearing in mind that she will command the army eventually, she put her all into her training.

Sara rose quickly through the ranks. Though it had more to do with her motivations when she got her Vision, nobody can deny that she earned her title as general. Her strict discipline even shows outside the battlefield. She maintains a strict schedule, only eats a certain amount of food during mealtime, and follows her standards to the letter.

She even has those standards for her house. Everything must be organized and no corner or floor should have dirt in it. More than that, she considers it training so she must do it herself, without the help of her servants. Her servants fretted so much that she had to put up a sign (‘Training in Progress. Do Not Disturb.’) to keep them from interfering.

Despite growing up among humans, Sara still finds the time to connect to her Tengu roots. She explores the mountains once in a while, encountering many creatures not in the stories. Once, some bake-danuki started stealing from the city, stumping the police. She set out to the wood and found the culprits. She intimidated the bake-danuki into staying on the good side of the law. After that, her visits to the mountains and forests include leaving behind some melons and other hardy foods in front of their dwelling.

She may be a cool and level-headed general, but a passionate fire burns within her. It’s a passion to do her utmost to serve the Raiden Shogun. You wouldn’t expect her to be first in line to buy a limited edition lacquerware statue of the Raiden Shogun, but that’s what people saw. Sara even had a shrine ready for it to be displayed in.

Five such display cases have been made, and Sara uses (cleaning) them as a method to relax. It makes her feel like the Shogun is nearer than the Tenshukaku, as well as strengthens her resolve. The Shogun, the Electro Archon, is the reason why she’s still alive after all, and this is a small act to prove her devotion to her ruler.

How Did Kujou Sara Got Her Vision

A small Tengu without a name fought against a great evil that threatened her land. However, she was too small and weak to fight with a Tengu’s full power. During a battle, she fell off a cliff with injured wings. She closed her eyes, unwilling to accept her fate. Her last thoughts were of her desire to protect her home forever.

The next day, some travelers saw an unconscious girl by the roadside. The girl was roughed up but still whole, and nobody could explain how she got there. With no other choice, the travelers reported it to the Tenryou Commission. The head of the commission, Kujou Takayuki, saw that the girl held a Vision, and believed that she was marked for a great destiny.

He gave her the name Sara and raised her to be a good soldier and general. Her home may have changed, but her will and desire have not. Perhaps that was part of the eternity the Electro Archon yearns for, and the reason Celestia granted her this favor.

Though a voice line from the Shogun implies that Archons don’t have any control over who gets Visions, they still should have some influence. For some reason, when the Shogun decided to enact the Vision Hunt Decree, no new Electro Visions were granted to the people. Specifically, she says it’s partly the will of the person and some vague ‘other’ factor. What that ‘other’ is, we don’t know yet, but if we’re taking the Shogun at her word, it’s not an Archon’s will.

At any rate, that’s all the information on Kujou Sara, from the recommended weapons and artifacts to her backstory. She’s not unusable by any stretch, you just have to work a bit harder to use her mechanics to the fullest. There’s no useless character in Genshin (yes, even Amber), it’s how you build and use them.

Then again, it’s okay to refuse to use a character if they don’t mesh well with your preferred playstyle. Sara’s playstyle can be a little too chaotic and slow for a timed fight such as in the Abyss. However, when used effectively, she can be an asset to the team. It’s your choice how to use her or not. Leveling her up just for the free fates is also an option.

That’s all for Kujou Sara. Whether you want to use her or not, keep on enjoying Genshin Impact!