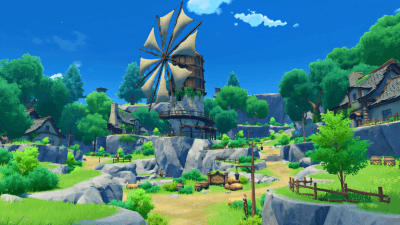 Recently, a web event for Alhaitham’s release made players match books from his reading list to its related ‘Darshan.’ The Darshans are the schools of the Genshin Impact Sumeru Akademiya, analogous to courses in college. You can also think of it like the houses in Harry Potter’s Hogwarts, but with an additional two and less hate and rivalry between them. Students may have antagonistic relationships with students of another Darshan. However, that will not reflect the feelings of the whole school of learning itself.

It can be challenging to get them all straight, so here is a guide and description of each Darshan. We’ll also list some notable characters that belong in each.

As the study of life, students concern themselves with biology, ecology, and medicine. It is the first Darshan to be established, originating from Greater Lord Rukkhadevata’s helpers in cultivating the rainforest. Amurta remains the most prominent Darshan in current times.

They have a building dedicated to their studies called the Pardis Dhyai, ‘the garden of meditation.’ It’s filled with greenhouses and plants and is the location of many seminars held by the Darshan. Though Tighnari has left the Akademiya to become a Forest Ranger, he still speaks about caring for the rainforest in Pardis Dhyai. The Birmastan, as a hospital in the city, is also related to the Amurta.

This Darshan is concerned with the study of ancient languages. It puts them in a conflict of approach with Vahumana scholars, as the latter is focused on history. The other school thinks their system is too narrow and specific, while Haravatat students think they’re being too generalist. Since this school is one of the smallest, you hardly see students from this Darshan.

In our world, engineers and architects are among the most respectable jobs. For a long time, it was so in Teyvat. Kshahrewar scholars significantly improved the living quality of Sumeru’s people. They were the ones to create the one-story versatile buildings you can see throughout the city. Plus, the nation’s textile industry boomed through their research into creating looms.

Pir Kavikavus, a renowned Kshahrewar researcher, pioneered many technologies. Unfortunately, while researching the Ruin Golem in Devantaka Mountain, an accident occurred and all his research was lost. Things were never the same for the Darshan afterward. Strict control for machinery and technology was implemented, severely restricting the research areas of scholars.

As a result, they became underfunded due to the need for more research topics they could produce. That created a vicious cycle where they couldn’t research new things without funds. However, they don’t have funds because they couldn’t do research.

Their saving grace is the merchant Dori, who funded the construction of the Palace of Alcazararay. She would also prefer to work with Kshahrewar scholars, finding them more reasonable than the other schools.

If Mona had ever become a Sumeru student, she’d be in this Darshan. Rtawahist scholars study the stars and celestial bodies, trying to see truth and destiny through the skies. Astrology and astronomy are part of what they learn, though they also allow other fortune-telling methods.

From a player’s viewpoint, this might be the most interesting Darshan. Spantamad scholars concern themselves with the elements, alchemy, the Ley Lines, and Irminsul. Due to the nature of their topics, it is the Darshan with the most Driyosh, students who are out doing fieldwork.

The Vahumana can be described as lore keepers or historians. They study the causation of events, seeking to generalize history to get insight into the present. Other social sciences also fall into their category of study, such as economics and a bit of psychology.

Their research takes them to explore ruins, innovate food preservation, or even prevent overfishing.

Though not part of the six Darshans, they deserve mention as the disciplinary force of the Akademiya. They’re feared by the students, as they punish those caught plagiarizing or using funds for non-Akademiya-related things. The Mahamata handles administrative tasks and searches for illegal sources of Canned Knowledge and, presumably, smuggled books. They also controlled the dissemination of information to the public through the now-defunct Akasha System.

The Matra investigates all research and decides whether to ban a particular topic that could lead to an academic ‘sin.’ There are six sins scholars must not do:

Any scholar, researcher, or student caught participating in these sins faces punishment heavier than other offenses incur. Despite a high position or good reputation, transgressors face imprisonment or expulsion from the Akademiya.

While Matra does not have strict requirements to become one, the Mahamata are explicitly Akademiya graduates. An example is Cyno, who studied under the same mentor as Lisa, establishing his position as a former student. However, a message on one of the various boards criticizes Cyno for not having a reputation as a famed researcher.

Each Darshan is headed by a Great Sage, while the Grand Sage leads the whole organization. There’s a fierce fight among the Sages about the succession of the latter position. Still, the details of the process aren’t mentioned. They form a council that oversees the management of the Akasha System and the governance of the whole nation.

After the events of the Archon Quest, the council is stripped bare as the majority colluded with the plan to make a new god. Alhaitham was offered the position of Grand Sage, but he turned it down. Still, he ended up with the job, temporarily.

In-game, when you see a student, their hat denotes which Darshan they’re from. A circular portion of the clothing would bear the school’s emblem, and a woven thread has the color. However, there are more NPC students without a hat than with one. Sages have a different uniform that doesn’t have a similar identifying mark.

Cyno’s voice line about Lisa explicitly states that he studied under the same mentor as her. This assumes that he was part of the Spantamad as a student. However, there could be interdisciplinary scholars who could mentor students from different Darshans, which still gives uncertainty to Cyno’s former Darshan.

Despite being in Haravatat, Faruzan leans toward Kshahrewar in interest. She became trapped in the time bubble due to wanting to solve a puzzle, something that’s in the realm of the latter Darshan. Many Kshahrewar scholars ask her for help and sometimes even ask her to transfer schools. Still, she insists on staying in Haravatat.

Alhaitham and Kaveh are a pair of Haravatat and Kshahrewar roommates with contrasting personalities. The former thinks in terms of logic and rationality, while the other puts more importance on emotions and feelings. It is highlighted further by their respective color schemes (black for Alhaitham and white for Kaveh), which are also their Darshan colors. Even their accent color is the opposite in the color wheel (green and red, respectively)!

As of 3.4, there are several playable characters from almost all of the Darshans:

Only Vahumana is left if Cyno really was from Spantamad.

The six Darshans seem to correspond to a sin or make it so that delving too deep can lead to one:

Though human evolution, life, and death all fall under Amurta, tampering with the latter falls under Kshahrewar. After all, in a non-magical world, what would you use to prolong your life? Technology. Alternatively, you can switch them, which would still make sense (body modification technology and/or medicines to prolong life).

By researching the Irminsul, Spantamad scholars could find specific information that can cause panic and widespread havoc. If they don’t have fear in making that public, they can cause unimaginable chaos. Considering that its corruption came from indescribable and incomprehensible knowledge from beyond, keeping these things a secret is prudent.

As for Vahumana, various subjects about religion fall under some social sciences, and this is the school that studies those. All Akademiya scholars are pretty rigorous in their research, and it can be easy for religious rituals to fall by the wayside. The others have more apparent connections (Rtawahist and what’s beyond the sky, Haravatat and the origin of language).

While there is correspondence, that does not signify causality. That means students from any Darshan are always in danger of committing any of these sins. They’re just more likely to do one more than the others.

Interestingly, with the reveal that Katheryne is a bionic puppet, someone had already succeeded in making a mechanical life form. Then again, it was done outside the Akademiya borders, making the rules moot. Still, Katheryne isn’t alive in the truest sense of the word, just doing what she’s programmed to do. Her life (or lack thereof) is a discussion for a different article.

That’s all for the Darshans of the Akademiya. Hope you learned something and that this made it easier to identify and recognize them. Continue having fun playing Genshin Impact!