EVE Online enjoys a reputation for being a lush platform for player trading. This is mostly due to the fact that, unlike other MMOs, Eve has an inherently strong focus on the in-game economy. Trading plays an integral part in EVE Online’s gameplay. Most players actually play it for the trading instead of the space warfare aspect. And just like thrifty traders, it’s important for players to focus on gathering or buying resources for cheap while subsequently selling them for a profit. 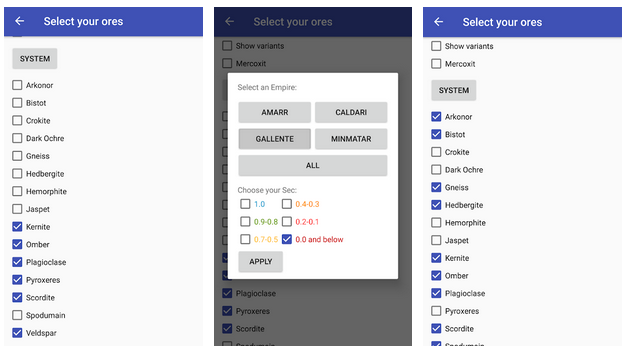 Many apps have been developed in Google Play store because of the sheer numbers involved in pricing because of the buy and sell component of EVE Online. The players’ purpose is to make the most of their trades and resources, after all.

Enter Peter, the developer of the EVE Online Mining Calculator. With it, players can select specific ores and fetch their prices in trade hubs. No more guesswork for us as we can focus on ores that are actually worth the bother. With such a compelling program from a creative mind, how can we not feature him?

You can download his app here. Let’s get to know the young man behind this nifty app a little better.

(1) Tell us about yourself? (your name/nickname, hometown, age, occupation, favorite games that you play and what platform(s) you play)

I’m Peter, 20 years old, and studying chemistry. I have been playing games ever since PokemonPlatin was released, but now I’m mainly a PC gamer. I have spent most of my time in LoL, SWTOR and EVE Online, but right now, I’m playing R6S, Overwatch and Divinity: Original Sin 2 with some friends.

It’s always cool to see that people are using something you made yourself. Also, it’s nice to know I made someone’s gaming experience a bit more convenient.

I wanted to learn coding android apps, so I began looking for things that might come in handy. I decided on this tool because there was no app similar to this yet, and it didn’t seem too hard to do.

I released this app on my own, but right now I’m also working with other people on Open-Source projects (I also made all of my apps open-source).

(5) From the developer’s (and gamers) perspective, how do you think the app affects the overall experience of the game?

It’s nothing game-changing, but I hope my app makes mining a bit more convenient. You don’t have to do all the math on your own, and you can just start mining. Personally, I always look up all the information I need while gaming on my phone, so these kinds of apps are great.

(6) Is there any margin for error when it comes to the app’s performance and provided information?

In EVE, prices always change, all the time. As such, there is no way to get 100% accurate information on how much profit mining something will give you. But my app is there to help you decide on what to mine, and the most expensive ores usually stay expensive. But whenever the server I’m getting my prices from has trouble, my app also suffers from it.

I’m not good at designing, so I focused on making something simple and that works well. It’s not the most beautiful app, but it has all the features I wanted to introduce, and it’s quite intuitive (in my opinion).

I have used Java in Android Studio, which I still use today. Kotlinis also exiting. Right now, I’m working on a Unity game, which I code in C#.

The biggest challenge was learning Java in general, which I did with the help of udacity.

But usually, when making an app, the hardest part is to get users. I got really lucky with 2 of my apps though: the mining helper was very well received on Reddit, while another app, Secure Photo Viewer, got a lot of coverage by android sites.

It doesn’t seem like anything new will come along anytime soon, but the recent changes to moon mining have already caused some problems for me. While the new moon ores definitely belong into my app, I can’t find a reliable way to get their prices from anywhere.

Definitely! As I have already stated, the app is now Open-Source and available on Github, so anyone can make improvements or take a look at the source code! So, if you feel like you want to change something about the app, add a feature, or want to make your own version of it, now you can.

Sure thing! The hardest part is always finding a feature I could develop that hasn’t been put into an app yet. As soon as I find something like this again I will definitely get to coding.

The only thing I can recommend is joining a good alliance or corp. More experienced players will help and you can have a lot more fun and cash in Null or in Wormholes. Even if you are more into mining, logistics, or industry, teaming up with others is good for you. Also, don’t trust anyone too much. There are enough people who will take everything they can from you as soon as they have the opportunity to do so!

Just go with it. Even if you have absolutely no experience, learning coding isn’t as scary as you might think. Online guides are amazing, and there are great communities that will answer any questions you might have. And of course, you aren’t only creating something; you are also learning a skill that might get handy in the future!