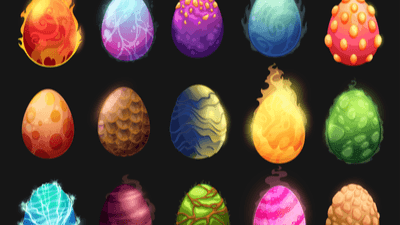 In Monster Hunter Stories 2: Wings of Ruin, players have the chance to hatch ‘em all by collecting Monsties from Monster Dens that are found in different throughout the game. If anyone wants to get the best Monsties and assemble the best team, then it’s the rare eggs they ought to be after. This is because rare eggs have a higher chance of producing stronger Monsties. Although players don’t need to get too deep into the mechanic, genes, especially when they get to the late-game and PvP challenges, is vital to consider.

It can be tough to find a specific Monstie without having to blindly travel around different locations in the game. With some of them being harder to catch than others, players need to know the different types of eggs that can be found in each area. Below is a table where players can find all the eggs in the game. Note that not all of the Monsties that will be specified can be hatched and that minor Monsties such as Jaggis, Konchus, and the like are not included.

Getting Egged On: How to Get Monstie Eggs

Despite the wholesome storytelling and bright visuals, getting Monstie eggs in the game is unexpectedly brutal. The only way to get Monstie eggs is to steal them from dens. That’s right, Riders just swoop in inside a den, grab the egg of their choice before the mother comes in, and skedaddle before they get caught. The dens in Monster Hunter Stories 2 are basically random mini-dungeons which are scattered around the map. Each Monster Den can contain one to three eggs, depending on RNG. Some nests are connected to story events, but for those that are gunning for the best chance of getting rarer eggs, random dens are the way to go. Rare Monster Dens can also be found, although they’re hard to come by, they can be easily identified, thanks to their gold foundation compared to the normal Monster Dens that are grey colored.

The Impact of An Egg’s Smell and Weight

What determines an egg’s rarity are its smell and weight. These two factors ultimately decide the number of gene slots that the Monstie is bound to have and what kind of quality gene they’ll receive. There are three classifications of smell and weight which Navirou comments on when a Rider grabs an egg. There’s a Normal, Stinky, and “This Reeks!” smell. The stronger the smell of the egg, the better chances that the genes will be of a higher quality. As for the weight, there’s Light, Normal, and Heavy. Heavier eggs tend to be Wyverns or Elder Dragons, so the ideal egg that players generally want to get is the heavy and smelly ones.

Collecting Monstie eggs can be addicting, especially once a player has unlocked the Rite of Channeling; that’s where mixing and matching genes by sacrificing inferior ones come into play. Since Capcom has been vigorously supporting Monster Hunter Stories 2: Wings of Ruin, players can expect a lot more endgame content and new Monsties to hatch. Who knows? Maybe Fatalis or Valstrax might make an appearance! Kulve Taroth was just recently announced, after all.