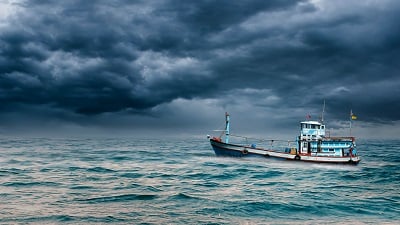 In this FFXIV ocean fishing article, we will discuss the following:

There are many fish in the ocean. In Final Fantasy XIV, this is literal, as you can actually fish when you’re out in the ocean. However, it’s pretty different from the usual fishing you’ll be doing in the game’s ponds, lakes, and rivers, thus the need to know more about it. For that, here’s our FFXIV ocean fishing guide.

What is FFXIV Ocean Fishing?

As the content’s name suggests, you’ll be going out into the ocean on a ship in order to catch fish. Each trip will have 1 to 24 players and will last for 60 minutes. So your goal is to catch as many fish as possible in that allotted time. However, due to the certain mechanics of the content, which can get quite tricky, there is the need for an FFXIV ocean fishing guide.

What’s good about ocean fishing is that you can do it at Fisher level 1. Apart from the super-basic requirement, there’s only one more thing you need to do to unlock this: finish the quest All the Fish in the Sea. To start with this quest, you have to go to Fhilsnoe. You’ll find him at the Limsa Lominsa Lower Decks (x7.8, y14.5). All you need to do is talk to him, and then he will direct you to Captain Foergazyl. You’ll find him at the docks close to the Arcanists’ Guild. Once you meet him, he’ll welcome you aboard the Endeavor.

How do I start Ocean Fishing in FFXIV?

Once you’ve unlocked ocean fishing, you can now speak to Dryskthota to get onboard. You’ll find her at the Limsa Lominsa Lower Decks (X:3.0 Y:12.7). If you want to enlist as an entire party, have the party leader talk to her. For solo players and parties that are less than eight, they’ll be automatically assigned to a party. Also, even if the overall number of participants is less than 24, the Endeavor will still depart at the assigned time anyway.

Like a cruise, the Endeavor has multiple routes. Which of them you’ll be on depends on the time you boarded the ship. Every route will not only feature different locations, but also the fish you can find in there. To check the route schedules, which will indicate the time of registration and location, you can ask Dryskthota.

Where will this endeavor take me?

The boat departs every two hours, and it makes a stop at three out of the four spots available chosen at random order, which are as follows:

This means a total of 15 combinations. Each stop has a different set of fish, so you better catch as many as possible in your five-minute stay in them. Because the fish differ from one spot to another, it’s important that you figure out which spots the route will be making a stop on. This is so that you can know beforehand which bait to use. While you can use Versatile Lure for the Endeavor, it’s more preferable to buy lures from the Merchant and Mender on the Limsa Lominsa Lower Decks (X:3.2 Y:12.8) or onboard the Endeavor (X:6.1 Y:6.1), as they are specifically for this content.

Why should I go to the ocean?

So, why go ocean fishing instead of sticking to the usual spots? Two reasons. For those who have yet to master Fishing, it’s a faster leveling up process. However, you will have to do some fishing in freshwater sources and beaches in-between the boarding times.

On the other hand, if you’ve already capped Fisher, then you’ll be going ocean fishing for two reasons: updating your records and earning scrips, the endgame currency for Disciples of Land. Finally, whatever your reason for ocean fishing may be, you can frame your catch from ocean fishing. It makes a really nice souvenir.

Square Enix just managed to make fishing not only more relaxing, but also more fun and rewarding. So, what are you waiting for? Leave the mainland for a bit, give your sea legs a stretch, and catch as many fish as you can by using all that you’ve learned from this FFXIV ocean fishing guide.