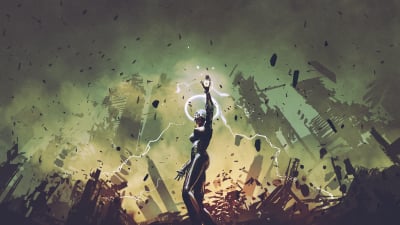 In this Sanctuary Onslaught guide, we’ll take you through everything you need to know about SO and ESO, how to get Khora, and what are the best Warframes you can use to tackle the harder ESO grind.

How Does Sanctuary Onslaught Work in Warframe?

The Sanctuary Onslaught modes can be accessed via the Sanctuary (located at Relays) by talking to Cephalon Simaris. The prerequisite for accessing these modes is the completion of the New Strange quest. You can always find players to squad up with through the Recruiting chat.

Similar to Survival missions, Sanctuary Onslaught is endless and has a team of four facing hordes of enemies with increasing difficulty over time. Unlike Survival missions, Sanctuary Onslaught doesn’t have Life Support Modules, but instead has an efficiency counter the squad has to maintain by killing enemies. Enemies do not drop resources or mods in these missions and containers aren’t available in these zones. However, eliminated enemies do drop Health and Energy orbs as usual.

While Survival missions have a regular map with no travel restrictions, Sanctuary Onslaught takes place in “zones”. Zones are closed rooms that last for 2.5 minutes each, at the end of which the squad can either move to the next zone via a conduit, or stay back and exit the mission. Note that Eximus enemies contribute more to the efficiency meter.

Which Warframe should you use in Elite Sanctuary Onslaught?

With Sanctuary Onslaught, you can get away with pretty much any Warframe since enemies take quite a while to ramp up the difficulty. Elite Sanctuary Onslaught is much harder and requires the right team composition for the team to last as long as possible. The standard preference for ESO squads is:

While these Warframes provide strength, Energy, and survivability to the team, they can certainly still use their weapons to deal damage.

Sanctuary Onslaught doesn’t need a whole lot of planning, unlike Elite Sanctuary Onslaught. The former is more casual, where each player can pick whatever frame they want and nobody has the responsibility of supporting the rest of the squad. You also don’t need a team of your own and can join a random lobby and start once you are matchmade with at least two others.

Have a Premade Squad

With Elite Sanctuary Onslaught, having a premade squad is a must. You honestly can’t survive without a Trinity on your team. On the other hand, having two of them on your squad is pretty much a waste, since it sets you back on DPS and the difficulty ramps up much faster than otherwise. You can easily find a group via Recruiting chat- look for messages like “LF ESO dps” rather than “LF ESO 2/4”. I’ve always found groups looking for specific Warframes to be more useful in Elite Sanctuary Onslaught, as the rest of the squad is already ready to go.

In the mission, don’t stay far from each other. It is important to stay nearby so that you can receive the health, energy, and ability buffs from your teammates. The most important thing is to stay alive, and sometimes that’s pretty hard, especially in the later zones. Being close to your teammates will make sure that you have someone ready to revive you. The mode gets considerably harder if one teammate is knocked down for too long.

Keep your eye on the Efficiency meter as well as on your own Ability cooldowns. It is important for all Warframes to keep up their abilities in these mission- right from Saryn’s spores to Trinity’s healing. Don’t waste Efficiency pickups unless you really need them, and when moving around the zone, make sure you don’t pick them up by mistake. Mark them so that everyone knows they’re there, and clarify the same in team chat before you start the mission.

Use your best builds for your Warframes and weapons. Elite Sanctuary Onslaught matches are quite annoying if you go in with sub-par gear or Warframe builds.

If you need Warframe items to complete your build, PlayerAuctions is the best place to buy them safely, securely, and quickly.

We hope our Sanctuary Onslaught guide helped you understand the game mode better. Make sure you discuss how many zones you want to complete with your squad! With the right builds and the good team, you can easily tackle the most common eight-zone target easily. You can even go further, but most teams will stop at eight and restart, due to the nature of the loot pool (AABC).