Genshin Impact: Amber’s Story and How She Got Her Vision 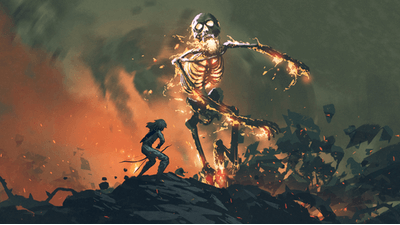 Titles: Mondstadt’s Gliding Champion, Outrider of the Knights of Favonius

For a majority of Genshin Impact players, once they get a ‘better’ Pyro character, Amber gets shafted into the ‘exploration only’ category. However, any character in Genshin is viable as long as you build them up correctly. Amber can fit in a few roles depending on how you want to use her.

But first, an explanation of her skills. Her E skill sends out Baron Bunny, who dances for a bit before exploding and dealing AoE Pyro DMG. It also taunts enemies, making targets focus on it. Baron Bunny has its own HP values scaling off of Amber’s HP. If it runs out, Baron Bunny explodes prematurely.

Elemental statuses may be applied to Baron Bunny. This lets Anemo users cause elemental absorption when hitting it. In line with that, skills that can pick up and move enemies (Jean’s Gale Blade, Venti’s skills, Kazuha’s Midare Ranzan) may also move the doll’s position.

Amber’s second constellation upgrade lets her hit the doll’s foot for a manual detonation. Her fourth constellation adds another charge as well as shortens its cooldown.

There’s also a bit of a problem when launching the target into the air might make the attack miss as well. Amber has some problems, but certain players seem to love using her in all kinds of content. Still, those players are in the minority and more players prefer other characters.

There are a few ways to build Amber. You can build her as a DPS ‘sniper’, utilizing charged shot attacks onto weak points. With her second ascension passive, these aimed shots can increase her attack by 15% for 10 seconds. This build would benefit from both the Wanderer’s Troupe and Crimson Witch sets. Whether that’s half and half or a 4-set of either, that’s okay. Focus on Crit Rate/DMG, ATK, and Pyro DMG Bonuses for the hat, timepiece, and goblet.

Any of the DPS bows will also do, such as Prototype Crescent, Blackcliff Warbow, and Hamayumi, and others. Rust isn’t too good, since you’ll be using Charged Shots more often. Of course, the 5-star bows are still the best.

Lastly, you can build her to make Baron Bunny a good distraction. That means building Amber’s HP so the doll can attract more enemies to it and damage all of them in the inevitable explosion. You’ll have to balance that with a bit of ATK and Crit so it can help with the damage output. Otherwise, it’ll be a good applicator of Pyro for reactions.

It’s up to you to decide what build to go for. No character in Genshin Impact is ‘useless’, but that’s a matter of preference.

Amber grew up in Mondstadt under her grandfather’s watch. A mischievous firecracker of a girl, she gets into scrapes more often than not. With her boundless energy, the Knight of Favonius couldn’t catch up to the little girl to give her a scolding. Damage control was left to her grandfather, the leader of the Outriders.

She knew that her grandpa loved her, and it was because of that that she understood the responsibility he took in doing so. However, it was only on the day he resigned from his post that she realized how heavy that responsibility was.

Her grandfather was a mercenary from Liyue. On a job escorting a traveling caravan, a particularly vicious attack led to a Favonius doctor saving the only survivor. To repay that debt, the mercenary joined the knight order. Before long, he founded the Outriders, training each member personally. The Outriders became a well-renowned branch of the Knights of Favonius.

That mercenary then thought of Mondstadt as his homeland and found love in it as well. That’s the story of Amber’s grandfather, the one who disappeared almost as soon as she joined the Outriders. With its leader gone, the Outriders fell into ruin with no proper guidance and turned into a laughingstock of the order.

Their leader’s departure sparked the rumor that he defected, pushing the Outriders into further ruin. Many of its members opted to be transferred into another position, leaving the inexperienced. This left them understaffed and overwhelmed, and so they couldn’t function as they were.

In the midst of all this, Amber, a new recruit, stood proud and determined to bring back the Outriders to its former glory. Whether being scolded or praised, she took it as a sign to keep improving herself. She’ll one day let the Outriders rise from their slump. She did it all to take on her grandfather’s legacy of protecting Mondstadt.

At first, she was a little coddled by the Knights. After all, they did see her as a precocious child and could hardly believe she’s growing up. Along with that, her grandfather had just disappeared with nary a word or sign of where he was going.

It was only later that those same knights figured out that Amber was growing up. She showed her dedication and determination, taking on extra tasks and being transparent about them. During one fight, they noticed her resourcefulness and courage and finally figured out that she was maturing.

Now, she’s a reliable and helpful Outrider, while still retaining her childhood energy. She keeps in mind all her grandfather’s teachings and is always on the lookout for any danger to the city. The people of Mond can rest easy with her on the case.

Even if she’s the best by default (she’s the only Outrider left), nothing can shake her confidence.

How Amber Got Her Vision

For a time, Amber thought she’ll figure out why her grandfather left once she reached his former position. Now that she’s the only Outrider left, she’s no closer to figuring out that mystery. As he had left with nothing to guide her, she had to forge her own path.

Amber stalled and floundered for a while. It is difficult to find a path without any kind of light until she found hers when she flipped through an old book of fables. One of the stories there was about the first time birds learned to fly.

Birds had wings, you see, but they didn’t know how to fly. The breeze that whispered through the land was so inviting, and they so wanted to learn how to ride it. They asked the Anemo God, and he replied that they have not found what is most important. As he spoke, the wind carried some dandelion seeds up and the seeds drifted along.

The birds stretched out their wings to catch the wind as the seeds can, but the gentle wind couldn’t support them. They were too heavy and the breeze was too weak. The flightless birds stumbled and rolled through the earth, yet they pushed to figure out a way to fly. When they came upon the gorge, they saw how the wind showed off its wild strength in comparison to the gentle breeze.

Without a shred of fear, they threw themselves off the cliff and flapped their wings as the winds howled. It worked, and the wind carried them up and up. They finally were able to fly freely in the sky. Elated by their achievement, they flew straight to the Anemo God. They chirped their joy and exclaimed that they only needed a stronger wind.

The god corrected them, saying that what they needed was courage, and it was that trait that let them learn how to fly.

Amber read those words and realized that instead of waiting for someone to guide her, she can create her own path with courage. With the realization that there must be something she can do, a Vision started glowing at her hip.

Her ambition and determination to bring back the former glory of the Outriders led to her Pyro Vision. The courage she gained let her blaze a trail in her wake, and the Outriders are well on its way to regaining its lost reputation. That is, as much as she alone can do, at least. As long as Amber’s at your side, you know everything will turn out well.

Remember, there’s no useless character in Genshin Impact. It’s all about how you want to build and use them. Whether you decide to use Amber or not, continue enjoying the game! A new event is coming up, so let’s look forward to a fluffy time.