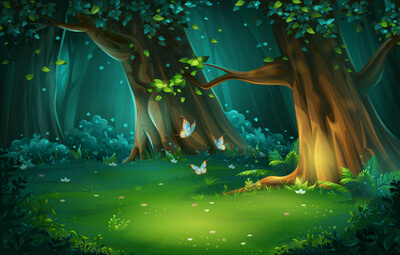 This is the story of a girl who lost everything and decided to burn all evil in the world. What happened and why did she decide to do so? Here’s her story, and some speculation on her whereabouts.

The CW set may be obtained by completing the Hidden Palace of Zhou Formula Domain in Wuwang Hill. It consists of the Witch’s Flower of Blaze, Witch’s Ever-Burning Plume, Witch’s End Time, Witch’s Heart Flames, and Witch’s Scorching Hat. As you can see, it’s easy to distinguish, as all of them have the possessive adjective Witch’s in their name.

Its 2-set effect increases Pyro DMG by 15%. Bumping it to 4 pieces equipped will have several effects. First, it increases the damage of Pyro-related elemental reactions. Burning and Overloaded get a 40% damage bonus, while Melt and Vaporize only get 15%. Next, it will increase the bonus of the 2-set effect by half for every use of the character’s Elemental Skill. That’s an extra 7.5% Pyro DMG bonus for every E skill used. It can stack to three (total of 22.5%) and lasts for 10 seconds.

The Pyro user who can use that second effect the most efficiently would be Diluc. His E skill can be activated three times consecutively, getting three stacks of that Pyro DMG bonus easily. Of course, to maximize it he would have to be in the infused state after his Burst. That way, he consistently deals Pyro DMG and makes use of that particular effect.

It doesn’t mean other Pyro users won’t benefit from the set! All of them get their damage boosted by this set, even Bennett, who’s primarily a support character. Giving him this set would make him a DPS on par with Diluc. Benny would still need a good weapon, though. At any rate, this is the go-to artifact set for any DPS Pyro character. Be sure to make use of the DMG bonuses of elemental reactions!

While her origins are unknown, she lived in Mondstadt some years before the calamity. A contemporary of Rostam and Arundolyn, she loved to sing and fell in love with the former. Rostam did love her in return, but she had to go to Sumeru to study. Before she left, her lover gave her a timepiece (whether Hydro-infused or normal water-powered is unclear) to mark the time she is away.

As she studied in Sumeru, the calamity happened. Monsters burst forth from the remnants of the ruined kingdom. Because these creatures threatened Mond, the Knights of Favonius went on an expedition to rid the source. They left the city with almost no protection, and Barbatos woke up to defend his city. That led to a calamity years later at the start of the game, but it’s better to play the game for that story instead.

Back to the expedition, it eventually failed, and Rostam fell defending his allies. The remaining soldiers returned and Arundolyn quit being Grand Master in his grief. The young woman returned to Mond only to realize her lover’s death.

In her despair, grief, and overwhelming feelings of loss, she used her life’s flames to become the Crimson Witch in full. Rumors said that liquid fire flowed under her skin instead of blood. The Witch used her newfound powers to burn away all the monsters she encountered, turning every one of them into ash. Despite not harming any humans, normal people became afraid of her and turned her away at every opportunity. In her quest to rid the world of all demons, she became blind to the devastation she left in her wake.

There is nothing that suggested her end, though perhaps she burnt out into ashes in some remote location. However, there is one prevailing theory about her.

A Turn for the Worst

The Pale Flame set suggests that it’s about some Fatui Harbingers. The feather seems to imply that it’s about Dottore, the mad scientist featured in the manga and mentioned in-game. The mask is Jester’s, the First of the Harbingers, and so forth. The interesting one is the Stainless Bloom.

Its description is about a young woman approached by the Jester. The conversation mentions a few key points:

Now, the first two are interesting parallels to what happened to the CW. This led many players to believe that the Witch is still alive and in the Tsaritsa’s service. The most common form of this theory is that this is La Signora, Eighth of the Harbingers. Stainless Bloom’s description says that the maiden agreed to let ‘glacial ice take the place of [her] erased path and extinguish these undying flames’. She also confirmed that the Tsaritsa had the same goals (see the second point).

The trailer to the 2.1 version of the game fueled this theory even more, as La Signora wields either Cryo or Pyro during her boss fight.

However, the last two points don’t seem to agree with the lore of the Crimson Witch. She was not corrupt at all and burned only the demons and monsters from the calamity. The Witch burned for vengeance and had no thoughts of atonement or redemption. Also, she had not killed any humans, her burning touch only ever reached the vile creatures that crawled out of the ruined kingdom.

The wording from the Elegy of the End (which is also about Rostam and the Witch) said that she ‘used her life’s flame to cleanse the world’s crookedness. That’s in contrast to the Stainless Bloom’s ‘filled herself with fire’. Okay, that’s a bit of a reach and can still go either way, as the difference between the two is only about the source.

One last point against this theory is the likelihood that La Signora has a Cryo Vision and a Pyro Delusion. If the Crimson Witch became Signora, it’s more logical to claim the reverse. That presents another problem, as there is a pattern to Vision holders wielding Delusions. So far, there are only two revealed Delusion holders but the pattern is evident somewhere else.

There are six kinds of Fatui Skirmishers: Geo and Pyro Bracers, Hydro and Cryo Gunners, and Anemoboxer and Electrohammer Vanguards. Taking out the Geo and Anemo elements, there are four reactive elements. Electro beats Hydro, Hydro beats Pyro, Pyro beats Cryo, and Cryo beats Electro. These are the elements that will reduce their shields more effectively than other elements.

Then again, these are all speculations and may be proven wrong once more information from the game gets revealed. Perhaps the Witch did not own any Vision and was granted both Vision and Delusion by the Tsaritsa. We’ll only see the truth as the game progresses.

Hope you enjoyed the story and the speculation on the Crimson Witch! More artifacts and item lore from Genshin Impact are coming, so keep your eyes on this blog. Have fun and keep enjoying Genshin!