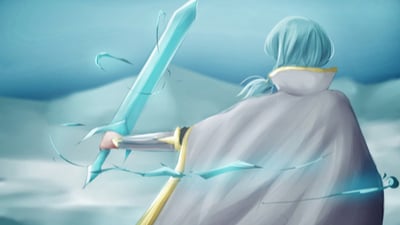 In Genshin Impact, Kaeya is one of the four starter characters in (other than the Traveler, Amber, and Lisa). He’s a strong physical DPS and a good applier of the Cryo element. His Elemental Skill, Frostgnaw, blasts a wave of ice at a short distance in front of him. His Burst, Glacial Waltz makes icicles orbit around him, dealing Cryo damage to any who get too close. This also persists even if you switch him out for another character. That’s a great way to set up other reactions, such as Superconduct, which decreases the target’s physical damage resistance.

He works best with a physical damage build, though Cryo damage bonuses will also work well. The latter is mainly for a support Kaeya who will only use his skills before switching to another character. Though his abilities may seem simple, it creates opportunities for teamwork and such. Plus, he has the utility to create ice bridges to cross bodies of water.

Crepus Ragnvindr adopted Kaeya on a stormy night. The latter’s father had abandoned him to fulfill a duty to their distant and ruined homeland, Khaenri’ah. He grew up with Diluc, Crepus’ biological son, and they treated each other like brothers. Mondstadt watched as these two grew up through the years like twins. Despite their contrasting personalities and looks, they were as close as brothers can be. Even when they were young, they protected their city with all their talents, in both the light and dark.

While out on a job, the convoy Diluc was escorting encountered a huge monster. In the ensuing fight, Crepus used a power that backfired on him. What happens next is unclear, whether Diluc ended his father’s misery or he succumbed to the injury the power caused. No matter what actually happened, the facts were that Crepus had died, and Kaeya arrived too late to do anything.

Wracked with guilt (he arrived too late and didn’t try consoling Diluc, coupled with the fact that he was a Khaenri’ah spy), Kaeya confessed everything to his ‘brother’ that night. It resulted in a fight that diverged their paths from each other forever.

Diluc had left the knights, but Kaeya stayed and climbed to the rank of Cavalry Captain. Although you can often find him in the taverns instead of the headquarters, you can trust that he’s doing his best to protect Mondstadt. With his silver tongue, even the most hardened criminal ends up succumbing to his witty banter and charm, though the alcohol also helps.

As captain, Kaeya firmly believes in the saying ‘the end justifies the means’ even if it puts his men in danger. In fact, he actually likes putting people in that kind of situation, where they’re stuck between a rock and a hard place. He relishes in people’s expressions when faced with that kind of choice, as well as in the fear his enemies express. It does earn Acting Grand Master Jean’s disapproval, but that’s no skin off his back.

A young knight once discovered a curious fact: when the drink ‘Death After Noon’ goes out of season, the rate of crime dips and stays that way until it comes back. When reported to the Cavalry Captain, all he offered was an “I’ll look into it,” and that’s the end of that. (He is the cause of the dips in crime after all, without his favorite drink to occupy his time.)

He has an extensive network of contacts, whether they’re more benign informants or planted spies in criminal organizations. His sword isn’t his only weapon, but also his wit and charm. As an example, there’s the wild goose chase he puts the Traveler on. It was actually a trap for some Treasure Hoarders, as there really was no treasure, to Paimon’s dismay.

Though he is ultimately a force for the good of Mondstadt, lies and trickery are his bread and butter.

How Did Kaeya Get His Vision?

That fateful fight with Diluc was the moment he got his Vision. As their swords clashed, Kaeya felt a surge of icy elemental energy. It clashed with Diluc’s fiery sword, blasting and stunning them both. His Vision ended up a memory of that day when he stepped out of his adoptive brother’s shadow and faced him with his true self. It’s also a reminder that he will forever live with the burden of lies.

Currently, the Cryo Archon is a mystery. Dainsleif described her as having lost her love for her people. Zhongli also cuts himself off with a sigh when describing her part of the ceremonial kite, as if the Archon had lost her ideal. Some have speculated that her ideal is ‘Love’, but that’s still up in the air. However, barring one, Cryo Vision users have lost or almost lost something they held dear to obtain their Vision.

For Qiqi, it was at the moment of her death and wanting to freeze time (she missed her family and wanted more time with them). For Diona, it was finding her injured father in the middle of a storm (almost lost her father). Finally for Kaeya, he lost his adoptive brother’s trust and bond by saying the truth. Chongyun is the outlier, having only resolved his goals, though you can say he affirmed his love of exorcism to fit the ‘God of Love’ theory.

And that’s everything you need (and can) know about this cool captain. It’s interesting to note how in Genshin Impact, Kaeya is the opposite of Diluc in almost every way. From their elements to their clothing and personality, it’s a wonder they even got along when they were young. Then again, it could’ve been a case of opposites attract. It’s a pity that they haven’t exactly reconciled in-game yet, though it’s nice to see they at least tolerate each other.

There are more character bios to come, so keep an eye on this space. Enjoy Genshin Impact!