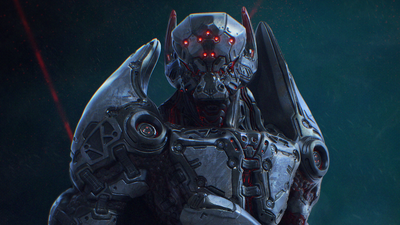 Volt is one of the first Warframes players get to know of when they start Warframe. It is one of the starter Warframes available through the tutorial – and while it is a fantastic Frame, it is highly recommended that you don’t pick him as your starter, because of how easy he is to obtain compared to other starters who take time to acquire.

Volt made it on our list of the top five DPS Warframes and is an absolute monster when it comes to decimating rooms full of enemies. In this Warframe Volt Prime build guide, we’ll be taking you through everything you need to know about Volt: how to acquire his parts, how to acquire the Prime version, how his abilities work, and the best builds for various situations.

How to obtain Volt and Volt Prime to Build in Warframe

Volt is one of the three starter frames (Excalibur, Volt, Mag) that are available for free through the tutorial. I highly recommend picking Excalibur as your starter instead as both Volt and Mag are easier to obtain. Volt is one of the easiest Warframes to acquire, as you can find his parts in the Tenno Lab in your clan’s dojo. You can also buy Volt from the Market for Platinum, or from Teshin for 60,000 syndicate points after you hit the Typhoon rank in Conclave.

Volt Prime can be obtained through the respective Relics, although it isn’t unvaulted often. I recommend getting your hands on the Prime version as well as it features better stats and great aesthetics.

Passive ability: Volt’s passive lets you charge up Electricity damage by walking, running, or even sliding between attacks This built-up damage can then be released through your next weapon or ability used. This passive ability, though good, is pretty forgettable as most of your attention will be on his nuking ability instead. It’s useful to pair Volt with a similar electric weapon such as the Amprex, that can make good use of the added damage.

Ability 1 – Shock: This ability lets Volt release an arc discharge towards the target (affected by Ability Range). Shock chains electricity to enemies in a radius, inflicting Electricity Damage to each enemy in the chain. Ability Strength affects the damage dealt. This ability is pretty lackluster compared to Volt’s other abilities, and I rarely find myself using it in missions.

Ability 2 – Speed: This ability grants increased movement speed, melee attack speed, and reload speed to Volt and nearby enemies. This can further be boosted by Ability Strength mods with duration being affected by Ability Duration mods, and makes for one of the most fun builds in the game. If you can maneuver through the maps easily, this build can let you and your team rush through quick missions such as Capture in no time, allowing you to farm Relics pretty fast. Is has also been proven that Volt’s max running speed is much higher than Gauss’s, even though Gauss has an animation that makes him look like he runs faster.

Ability 3 – Electric Shield: This is another great ability that is useful in team-based missions, especially Survival. Volt conjures an electric shield barrier that can absorb incoming fire. Moreover, shooting through this wall will grant you and your team a great damage and crit multiplier on your weapons. The only mods that affect this are ones that boost Ability Duration, allowing you to keep up the wall for a longer period of time. This ability is great for camping in a room in Survival missions, and unlike Atlas’s wall, it lets you shoot through the barrier as well.

Ability 4 – Discharge: This is Volt’s signature nuke ability. Using Discharge releases a powerful electric pulse, stunning enemies for a short duration and sending electric arcs and creating Electric procs to nearby enemies. This ability can let you nuke enemies beyond walls, chaining them and spreading damage pretty efficiently, as the ability is not affected by environmental obstructions.

How to build Volt Prime for speed-running missions

The speed build focuses on Volt’s second ability and only requires you to use Ability Strength mods like Umbral Intensify and Augur Secrets. Add in some Streamline (+Efficiency) and Primed Flow (+Energy capacity) for a larger Energy pool and higher Efficiency that can let you use the ability more frequently. Ability Duration is also important here as it lets you increase the duration of how long the ability buff lasts, which is why you should add in Primed Continuity and Constitution as well.

There is also an Exilus mod called “Speed Drift” that grants extra movement speed, although this only works for you, unlike the ability that works on your teammates as well.

How to build Volt Prime for nuking (ESO and otherwise)

Being a great nuke, Volt is one of the best frames to use in Sanctuary Onslaught and Elite Sanctuary Onslaught. ESO teams always have a Trinity on the team that can let you regenerate Energy, which makes this build not require Streamline (+Ability Efficiency) at all. You can instead add in Augur Secrets or Power Drift to use up the available Mod slots while also adding Ability Strength. It feels great to use Volt in ESO missions as you can spam his fourth ability almost infinitely because of Trinity recharging your Energy.

However, in regular star-chart builds, this is not an option at all, as Ability Efficiency becomes important. When doing missions on regular planets or even in a Sortie, go for:

This makes for a pretty balanced build that lets you use all four abilities while also allowing you to regularly nuke enemies with Discharge.

We hope our Volt Prime build guide helped you understand the Warframe better and decide what kind of build you want to pick for him.