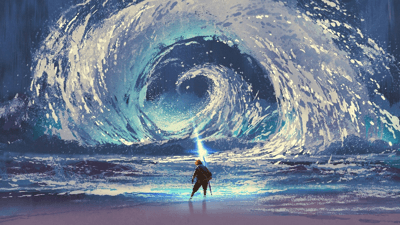 Tartaglia in Genshin Impact is unique in more ways than one. Despite hailing from Snezhnaya, he’s usually grouped among the characters in Liyue. He’s also one of the Fatui Harbingers, the game’s antagonists, as anyone who plays can attest. Lastly, he has the unique mechanic of being a bow user (ranged) who can switch to a melee style.

That’s the effect of his Elemental Skill, Foul Legacy: Raging Tide. When activated, all his normal and charged attacks become infused with the Hydro element, all in melee range. With his fourth Ascension Talent, critical hits with this active skill inflict the unique ‘Riptide’ effect. It marks the target, and charged shot attacks with a bow, or a melee attack (every 1.5s) can make it burst and deal AoE Hydro DMG.

His Elemental Burst has different effects depending on whether he’s in a ranged or melee stance. While ranged, he shoots a Hydro-infused arrow that explodes when it hits the target. The blast marks enemies in its range with Riptide. This also returns a portion of energy to him.

In his melee stance, he slashes in a large area of effect, dealing damage and triggering Riptide Blast when there are marked enemies. Riptide Blast deals further AoE Hydro DMG that the game considers as Elemental Burst damage.

Childe can only be a DPS, alternating with a sub when his notoriously long cooldowns are in effect. The ways to prevent the long timer is to either get his constellation upgrades or keep the time of how long you use his skill. The CD would also be proportionately short if the skill is active for a short time. Anemo Resonance is also an option, but there are better reactions to create with Hydro than just Swirl.

Crit Rate is also an important stat to keep applying Riptide marks to enemies. That and Crit DMG can boost his damage output immensely, so it’s worth building up.

Possible Sets: Heart of Depth, Echoes of an Offering, Combination of any ATK +18% set and Heart of Depth (Wanderer’s Troupe is your last resort)

Tartaglia has two signature weapons, a 5-star and a 4-star. Those are the Polar Star (5*) and Rust (4*). If you’ve been wishing, you might’ve already received the latter from the gacha. It’s available from any banner, though it sometimes features with a rate up in the Limited Weapon one. Polar Star is a Limited Weapon, available when Childe is featured in the Limited Character banner.

Other bows he could use are:

No matter how you put it, there is something off about him. If the bloodlust and thirst for a good battle don’t tip you off, maybe his ‘Foul Legacy Transformation’ will. Spoilers for the Golden House Domain fight: you fight Childe, which has three stages. First, he uses his Hydro Vision. Second, he uses his Electro Delusion. And third, he uses the transformation, which can wield both elements. (End spoiler.)

Ajax wasn’t born that way. He was a shy and sweet kid, maybe hesitant to cause trouble. He has a big family, with at least three older and three younger siblings. Ever the storm’s center, he wandered into the forest at age 14 with a shortsword and bread on hand. He came out three days later, a different person.

His voice lines suggest he fell into the Abyss and spent three months there. That’s where he met Skirk, who trained him in that hellish underworld in all kinds of weaponry. Nobody is sure what exactly he saw and did in those three months as he never told anyone, but the effect on him was too noticeable. One proof is his ‘dead-looking’ eyes that lack the shine even grumpy Diluc has.

After returning from his trip, he showed some troubling behavior for even more proof. His newfound sense of confidence and battle lust caused his parents no end of trouble. He seemed to stir up conflict everywhere he went, reveling in those fights. After a nasty, near-fatal brawl, his father finally reached the end of his rope and enlisted Ajax (was he still Ajax at that point?) into the ranks of the Fatui.

Hoping the training could rein in the child’s frivolous temper, the father was treated to a spectacle instead. His child beat each and every military man who rose to the challenge. His disappointment didn’t deter the 5th of the Fatui Harbingers’ curiosity, though.

Under the guise of punishment, Pulcinella took Ajax into the Fatui ranks, making the kid start from the bottom in the service to the Tsaritsa. This had the effect of satisfying his blood and battle lust by fighting for the Fatui. He quickly rose through the ranks to become the 11th Fatui Harbinger, Tartaglia, with the title Childe.

At this point, he had all but discarded his former name. While we, as players, realize it through his character stories, he had not told it to the Traveler or anyone on screen. Pulcinella is likely to know as he was the one who recruited Ajax, but otherwise, nobody knows.

Now, he’s a young man who follows the beat of his drum, unbound by conventions. He may seem cavalier and easygoing, but this facade hides his meticulousness. He will keep his promises, no matter how absurd it is. Also, even with his war-mongering nature, he still cares for his family. That’s best seen in his personal quest when his little brother Teucer visits Liyue. Childe is the vanguard and will strike at the Fatui’s enemies with surgical precision. He’s got several years of battle experience under his belt, though he still can’t get the hang of bows.

Still, his conflict-loving characteristic didn’t rub well with his co-workers. Most of the Harbingers want to be stationed away from him. Thus, he’s usually stationed as far away from Snezhnaya as possible. He’s probably the most traveled Harbinger because of this. The rest want to avoid the fallout from his problematic battle lust. His showy personality doesn’t mesh well with the others, as they would rather keep a low profile. Childe is always the storm’s center and would rather be part of the show.

The one thing that stayed with him even as he became Tartaglia was the hobby of ice fishing or fishing in general. He used to accompany his father, digging holes in the ice and waiting for a bite. Through the long wait, his parent regaled him with stories of adventure. Since there’s no ice nor a parent to tell him stories, fishing has become a meditative activity for him. He would train endurance or reflect on techniques.