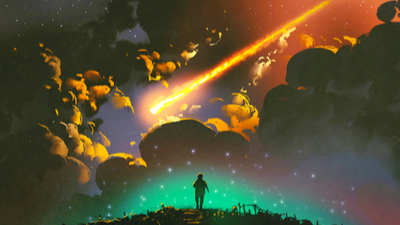 The new Genshin Impact event, Unreconciled Stars, brings forth a mysterious meteor shower that can be seen in the wonderful world of Teyvat. Unfortunately, the spectacle is more than just a sight to behold as anyone who touches the meteors falls into a deep sleep—one from which there seems to be no waking up. The Knights of Favonius ask you, the Traveler and Honorary Knight, to investigate the issue.

Also check out our other Genshin Impact articles!

You’re partnered with Fischl, the ‘Prinzessin der Verurteilung’, and her avian companion Oz as you go across Teyvat to deal with the threat.

For Travelers, this is an opportunity to get Fischl herself, as well as Primogems, Ascension, Level, and Talent Up materials. Complete the quests and objectives to increase your rewards!

To start this quest, you’ll need to go to Katheryne in Mondstadt. Note that you have to be at least Adventure Rank 20 to do so. Once there, meet up with Fischl and go to the hastily set up sick camp near Springvale for a little reconnaissance and info gathering. After talking to the NPCs, Draff will come up to the Traveler to ask for help.

It turns out one of the more curious hunters went off to find the meteorites. Worried he might fall into the same state as the victims, you will rush headlong to the scene. Paimon will then note the increased aggression of creatures near the meteorites, and you will decide to find and pick them up. Fischl’s Vision glows near the stones, and that’s how you will track them down.

Once you reach this point, you will have finished the first event quest.

Now that you’ve completed the first quest, there are a few objectives you should do next. The first is to find seven (or more) fallen meteorites in areas indicated to you. They are called Fading Star’s Might. Collecting them lets you buy the materials sold in the first section of the event shop.

While collecting fallen meteorites, the minimap will show you the general location of one. There will also be a sound cue similar to the proximity of an elemental oculus. Your character’s Vision will also flash when one is nearby. It would be very convenient if you use a character who wears theirs on their back. Notable exceptions are the Traveler and Venti, both of whom do not have a Vision.

Next, you should check the ‘Meteoric Wave’ section of the event. These are all extra quests you can do after finishing the main event quest. They reward Fading Star’s Might, Primogems, and Mora, so don’t just pass them by!

Now that the crisis in Springvale has been sorted out, you will be called to the Dawn Winery for some tea and yet another problem to solve. Two winery delivery guys had not returned when they were due and you are promptly tasked to find and bring them back if you can.

You’ll find one near the Stone Gate, after some questioning. He’ll say that his companion’s cart got struck by one of the falling rocks and had sent him ahead to get help. You assure the worker that you’ll get his companion back and continue on.

There’ll be a strange man claiming to hail from Inazuma hovering around the other delivery guy. After some conversation, you will continue on to the Wangshu Inn where all the victims are gathered. When you talk to the inn owner, you will be tasked to pick up meteorites again.

This time, you’re going to be introduced to Meteorite Remains Salvaging. These huge chunks of meteors take a little longer to remove, and you’ll be attacked by monsters as you do. Completing the challenge lets you know that the Fatui is also investigating the same meteorites and that you’ll need help.

Go back to Mondstadt and talk to Katheryne. She will call Mona, an astrologer and expert of stars, to help you and Fischl. Let her perform her hydromancy at the designated location, and you will be done with the second quest.

While waiting for the third and last phase of the event, there’ll still be plenty for you to do. You can continue picking up Fading Star’s Might or tackle the new Meteorite Salvage Challenges. There’s also a new batch of quests to do in the Meteoric Wave section of the event.

Collect all the currency you can to get the most rewards!

Also, it’s easy to forget that there’s the Stone Harbor Treasure Journal event ongoing. That’s the one you access through your mail. Just set up an assignment to do and wait for the timer to end. You might want to set up reminders to check it every once in a while.

Don’t let yourself ignore this event. It rewards you with Primogems and Mora when you do them. The whole process takes only a few minutes each time. Hit the goal of 48000 credits and you will be rewarded with a total of 200 Primogems and 50,000 Mora.

The third and last part of the Genshin Impact Unreconciled Stars event is coming soon, so let’s look forward to that. Make the most of the ongoing events, and enjoy Genshin Impact!