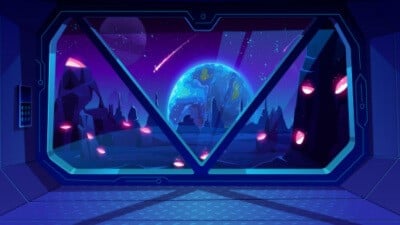 Inside each faction’s quarters sits their leader, from whom players can accept quests and jobs, and a shop that sells items. Each faction has its specialty. Aside from having specialty weapons, each faction shop has items that are exclusive to their shop only. A faction’s shop will have more weapons and items unlocked as the player increases his Reputation level towards that faction.

Korolev’s specialty is mining ores. They are an industrial section of the Prospector Station. They offer jobs that require players to gather ores or electric components.

Osiris is in charge of research and technology aboard the Prospector Station. They offer jobs that require the player to gather medicinal or technological materials.

The ICA is the main organization that supports the Prospector Station and all prospectors. They offer quests that require players to gather materials to support the station or stash equipment in caches around Fortuna III to support the people on the planet’s surface.

What Do Cycle: The Frontier Faction Shops Offer?

The Korolev shop’s exclusive offers are mining tools that make mining for ores more efficient and a drill required to excavate ores in certain areas. They also have Mineral Scanner modifications that scan for specific types of ores. The Osiris shop offers stronger Medkits and Syringes that players use to recover health. The ICA offers different kinds of grenades and Data Drives, which players can upgrade in uplink stations on Fortuna III.

Which The Cycle: Frontier Faction is the Best to Level Up?

Each faction’s exclusive items are helpful when going into Fortuna III. Based on items alone, Korolev should be the priority faction to level. They offer mining tools that make mining ores easier. They also offer tools required for mining in certain locations on Fortuna III. However, their weapon selection is not the best, except maybe for the Hammer, which can devastate creatures and other players in later stages of the game.

The faction shop with the best selection of weapons is ICA’s. The Bulldog is impressive in the early game and is available in the early levels of the ICA shop. It’s handy against other players in close range. Late-game weapons like the Shattergun and Voltaic Brute are also great choices. They can quickly take down enemies at close range, which is how most engagements in Fortuna III are. However, the jobs and quests from ICA might be hard to accomplish for some players, especially those pesky data drive jobs.

The easiest jobs are on Osiris. Most jobs in Osiris require players to kill fauna in Fortuna III, like Striders or Rattlers or gather organic materials like Brightcap Mushrooms or Waterweed Filaments. However, players can craft higher-tier Medkits and Syringes, so their exclusive offers aren’t worth much.

Each faction has its strengths and weaknesses. So we recommend this strategy of leveling the factions.

Focus on increasing the level of Osiris first because of the early game help they provide. The Manticore unique gun they offer is handy in the early game. The Uncommon tier of Medkits and Syringes are also extremely helpful in getting a player to evacuate Fortuna III in one piece.

When players reach the level to unlock those, it’s time to focus on Korolev and get the mining tools that they will need. All of the mining tools are helpful in mining for ores. The Laser Drill, which is required for mining Letium, is only unlocked after finishing a series of Korolev quests.

Once that’s done, players have the option to increase the level of ICA for powerful weapons. In the late game, enemies are stronger and harder to kill. Players in the late game are also more aggressive; PvP is more prominent in later stages of the game.

Look at the weapons available and check out what works for you. Once players have unlocked the essential items from the faction shops, they can work on increasing the level of the faction that offers their preferred gun.

However, remember that it’s good to take on jobs and quests of all The Cycle: Frontier factions because they give out Scrips that are used to increase the level of the player’s quarters. Work your way to increasing the Faction Reputation levels and enjoy the world of Fortuna III!