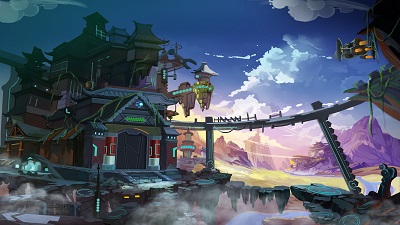 World of Warcraft has always been more than a mere massive multiplayer online game (or MMORPG) as there are so many things that you can do in-game. But the game also has unique events and festivals that are incredibly fun, although most players probably aren’t very familiar with them. That’s exactly why we’ve decided to make a comprehensive Darkmoon Faire Classic WoW guide!

Apart from completing different quests, running end game dungeons, squaring off with other players in BGs or just exploring the vast world, Darkmoon Faire is definitely one of the more exciting in-game activities.

So make sure to stick around as we explore the nuts and bolts of the vanilla Darkmoon Faire!

Darkmoon Faire offers games, vendors, prizes, and rewards, including some valuable Best in Slot items for those determined souls willing to put the time and effort into it.

What is Darkmoon Faire?

The Darkmoon Faire is a monthly in-game festival that was initially released in WoW back in July 2005 with patch 1.6. This unique event comes with a plethora of rewards and prices, as well as mini-games.

Moreover, the thematic festival even offers BiS items, although you’ll have to invest quite a bit of time to acquire them. Other than that, Darkmoon Faire has remained almost unchanged during its pre-TBC days.

Where and When Can You Find Darkmoon Faire Classic?

The Darkmoon Faire always appears every month and at only two possible locations – Mulgore (Kalimdor) or Elwynn Forest (Eastern Kingdoms). Thus, each location rotates on a monthly basis meaning one month it’ll be in Elwynn Forest and the next in Mulgore.

With that being said, the festival can only appear in one location at a time. And to signify the arrival of the fair there’s a specific barker for each faction – Kruban Darkblade (Horde) in Orgrimmar and Melnan Darkstone (Alliance) in Ironforge.

The Darkmoon Faire Comes on the First Friday of Each Month!

This is when the festival arrives and begins the setup that continues throughout the weekend. Then the faire opens on Monday and stays open until the next Sunday, which marks the end of the event for the particular month.

But don’t mistake the setup period for the days during which the faire is open. There are no NPCs that you can interact with during the setup phase.

Regardless, here’s a sample schedule of the event for your convenience (note that the festival wasn’t available in January for 2020):

How Do You Get to Darkmoon Faire?

There are two methods for each faction – a shorter one albeit more dangerous and a longer, but safer one:

The Route to Elwynn Forest

Darkmoon Faire Classic Tickets – What Are They Used For?

The Darkmoon Fair tickets are a currency that you can use to trade in for unique items at the event. Additionally, you can earn the Darkmoon Faire Prize Ticket currency in several ways including turning in animal parts and completing particular quests.

You can also receive tickets by making specific items via professions such as Blacksmithing, Engineering and Leatherworking. However, although some of the quests do rely on items made by the following professions, there’s no advantage to making them yourself, instead of just buying these items from the AH.

And after you start gathering tickets, you can then exchange them for a total of 9 different items:

Also, the NPC that sells these items is the goblin Gelvas Grimegate who can be found at either Elwynn Forest or Mulgore, depending on where the festival is this month.

Darkmoon Faire Reputation – What is it and How Do You Earn it?

Regardless, the way you earn more operation with the Darkmoon Faire is by (up until 5,999/6,000 Friendly) is by turning in various tiers of items such as:

And once you go beyond the 5,999/6,000-mark within the Friendly reputation level, you’ll have to turn in Darkmoon card decks as each will boost your reputation by 150.

Folks, we truly hope that you found our Darkmoon Faire Classic guide helpful and valuable. Now you know what this event is all about, when it appears, how to get there, what you can do with the thematic tickets and how to boost your reputation with the DF.

Now, have you ever attended the Darkmoon Faire festival?

Let us know by dropping your answer below!