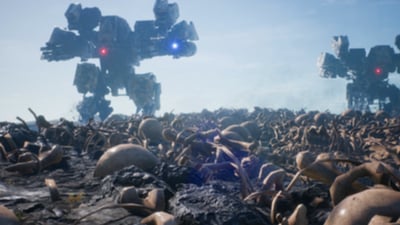 Garuda is one of those Warframes that has great ability synergy and also scales well with enemy levels. With a good Warframe build, Garuda has great DPS potential, can consistently dish out damage, and also has some useful utilities that allow her to tank hard as well. Garuda is based on a mythological eagle-like bird, a powerful predator that is considered the king of birds.

The Warframe Garuda is enjoyable to play with, and the Slash nerf hurt her 1+4 synergy a bit, but she’s still a great frame to use. She’s pretty good against Grineer and does very well on Steel Path too! Her signature weapon is the Nagantaka crossbow, which on its own isn’t a great weapon but has Slash damage synergy with Garuda.

In this guide, we’ll be taking you through how to build Garuda, acquire her components, and how you can mod this Warframe to the best of her capabilities.

How to get Garuda’s components and Warframe blueprints

The main Garuda blueprint can be obtained via the Vox Solaris quest. Successful completion will automatically reward the blueprint. You can also get these for fifty-thousand credits from Cephalon Simaris.

To obtain Garuda’s component blueprints, you have to do Bounties in Orb Vallis, with certain Bounties having a chance to drop a specific component blueprint. Garuda’s Chassis blueprint has the highest chance of dropping and her Systems have the lowest chance, but they’re only separated by 8% (30 and 22).

Garuda’s passive ability gives her damage buffs on losing health, proportionate to the percentage of health Garuda is missing – as long as you have at least 2 HP. The buff is represented using an icon next to the health/shield level bars, and applies to both – her abilities and weapons.

Speaking of weapons, Garuda has a special weapon called Garuda’s Talons – these are exclusive to this Warframe. When you keep the melee spot on Garuda empty through the Arsenal, her Talons can be used as a melee weapon. It has its own customization and color scheme option that you can pick as well.

Garuda steals the life force from enemies and leverages it as a shield that can trap damage. She pounces on a target (affected by Ability Range), staggers enemies around her, and the enemy instantly dies if its health is under 40%. Garuda then creates a shield (Dread Mirror) in front of her that blocks and absorbs damage. You can charge and turn this into an explosive shot.

If the enemy instantly died, Garuda absorbs more health – this is not affected by mods. As Dread Heart floats over Garuda, you can hold the ability button to drain Energy every second and buff the damage absorbed. Releasing this releases the explosive shot – with a 100% Status Chance – to where you’re aiming. Ability Range affects the radius of this explosion as well.

Garuda impales enemies using talons, disables them in suspension, and turns them into siphons (you can create a maximum of three) for up to 20 seconds. Standing in a visible radius of up to 8 meters around the impaled enemy buffs Health to Garuda, your companions, and your teammates. Health gained per second is affected by Ability Strength, duration of suspension by Ability Duration, and radius by Ability Range.

You can also choose to manually release the victim by pressing the ability key again while aiming at the enemy.

The Bloodletting ability lets Garuda restore Energy by sacrificing health. She damages herself, losing about half of her health and restoring about 35% Energy (35% of the maximum capacity), the gain being affected by Ability Efficiency mods. The ability costs zero Energy to cast.

Now if Garuda is already low on Health, the Energy gain will still follow the formula: Energy restored = Base Energy gained ÷ (2 – Ability Efficiency). Note that there are mods like Hunter Adrenaline that are not affected by this transaction at all.

How to Mod and Build Garuda effectively

Garuda is one of the most flexible Warframes to build. She doesn’t really fit any niche in the game and doesn’t do well in missions like Spy, but she’s great as a DPS-machine-slash-tank. With great survivability and virtually infinite Energy, she scales very well with enemy levels. When paired with Ember, you can drain your Health with your third ability, then gain back energy to heal yourself.

The consistent build for Garuda is as follows:

Garuda also has an interesting Augment Mod called Bleeding Talons that you can use. This Mod lets you conjure a seven-meter area around you, where your Talons weapon has twice the Combo Count Chance when hitting targets that are affected by the Bleed Status effect.

Her fourth ability adds Slash procs which is incredible against Grineer, no matter their level. This can pair well with Rhino’s Roar. That ability makes it so that you can pretty much ignore armor on your enemies.

Garuda is underplayed in the meta, and can be great if you Mod her right, especially by utilizing her passive ability that buffs her damage the lower she is on Health. At 2 Health, you’re basically doing double the damage. The Quick Thinking mod can be great for her too, as it lets you use your Energy pool for Health instead.

Garuda has an active playstyle with infinite Energy potential, and needs you to keep going to cycle your Energy and Health as you do damage. We hope our Garuda Guide helped you understand this Warframe and the best build that you can use with her in high-level missions.